Friday's massacre at an elementary school in Newtown, Conn., was the primary topic of discussion among the Heat, even though they were gathered to finish prepping for a Saturday night game against Washington. 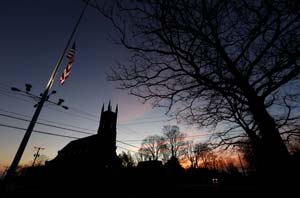 When the Miami Heat players and coaches showed up for work Saturday morning, basketball was secondary.

Newtown was the focus.

Friday's massacre at an elementary school in Newtown, Conn., was the primary topic of discussion among the Heat, even though they were gathered to finish prepping for a Saturday night game against Washington. It's rare for anything to overshadow basketball on the Heat practice court, but clearly, this was not going to be a typical day.

"Basketball, this is nothing," Heat forward LeBron James said. "These games are nothing compared to when you have a tragedy like that. It sucks that sometimes you need a tragedy to put things back in perspective, to appreciate what you have. But it does that to people. It's unfortunate that you have to have something like that to understand what's really important and some things that aren't important at all. Family is the No. 1 important thing in life."

It's likely that many Heat players and coaches had never heard of Newtown before Friday.

That doesn't mean they weren't affected, like countless others. Moments of silence were observed before many games.

In Memphis before tipoff of a college basketball game against Louisville, a moment of silence was observed for the victims and for 32-year-old Memphis police officer Martoiya Lang, a mother of four children, who was shot and killed on Friday. Public address announcer Chuck Roberts struggled and his voice choked up a bit as he said the Memphis officer's name. And he finished after the moment ended with "Amen."

In England, the Queens Park Rangers soccer team wore black armbands at the request of its players during a Premier League match against Fulham. Chelsea captain John Terry on Instagram said "So So Sad" beneath a picture of a candle, and he urged prayers for school. Manchester City captain Vincent Kompany tweeted: "Giving guns to everyone to 'protect' their home or fighting to get rid of all the guns? How many more Newtons will it take?"

Moments of silence were everywhere, from a minor-league hockey game in Hershey, Pa.; a U.S. women's soccer exhibition match in Boca Raton, Fla.; and at golf's Father-Son Challenge in Orlando, Fla., where all players and caddies wore black ribbons to honor the victims.

More tributes - many more - are coming from the sports world over the next few days. It's expected that all NFL games this weekend will be preceded by tributes, such as moments of silence and helmet decals. The New York Giants and New York Jets both plan to wear the letters S.H.E.S., for Sandy Hill Elementary School, on their helmets this weekend. And the New England Patriots will light flares for each of the 26 people killed at the school.

"Our thoughts and prayers are with all the people impacted by that tragedy," Jets coach Rex Ryan said Saturday. "It's, wow, it's amazing. ... Just a horrific deal that happened there."

The Heat also held a moment of silence Saturday night, with many players being accompanied on the court by their children. Chris Bosh held his son, Jackson, tightly against his chest.

Heat coach Erik Spoelstra has shopped at the Clackamas Town Center, a mall in his native Oregon where a gunman killed two people Tuesday and then himself. One of Dwyane Wade's nephews was shot last March in Chicago, where gun violence is a major topic of discussion. Ray Allen attended the University of Connecticut, still calls it "my state" and expressed shock as he tried to collect information about Friday's events.

"It's still on my mind. I'm really emotional about it. My eyes water up a little bit just thinking about it right now. Your kids are what you live for," Heat forward Udonis Haslem said, his voice barely above a whisper.

Spoelstra typically comes into the Heat interview room after game-day practices and makes a brief statement about injury situations or what the team worked on that particular day.

He started his remarks Saturday by talking about Newtown, nothing about the Heat or the Wizards.

"It's despicable," he added. "It's a horrific tragedy. And it doesn't matter whether you have family or not or kids or not, you can't relate to a tragedy like that."

Spoelstra said he monitored news reports on the Internet until late Friday night. James was getting updated on the day's events even as the Heat were visiting sick children in a pair of Miami hospitals on Friday afternoon, after which he immediately went home and hugged his own sons, neither of whom is likely old enough to comprehend what took place inside that Newtown school.

"Just having two kids of my own, in elementary, I could not imagine sending them off to school and them not returning," James said.

Haslem has three sons, and said he tried telling his oldest boy that "things happen in this world that we have no control over."

He's all-too-familiar with the grieving process, having lost close friends and relatives over the years. Still, Haslem insisted that he cannot comprehend what the families in Newtown feel, especially with this all happening so close to Christmas.

"We love the money, we love the fame, we love the sport, but at the end of the day, we do this for our kids and the legacy to give them things you never had," Haslem said. "If it was about us, a lot of us would have retired after our first contract. You do this for your kids. Your kids are everything. My three kids are my heart. I just imagine someone taking my heart away from me. Might as well kill me."