Haslem to be inducted into Florida's Hall of Fame 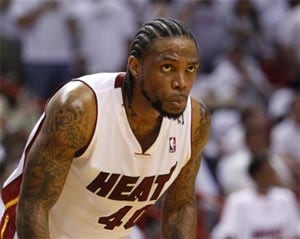 Wambach was a four-time All-American and has played on three World Cup teams. Haslem was a first team All-SEC selection in 2001 and 2002.

Brown holds the school record for sacks with 33. Clark was a three-time NCAA champion. Guise was an 11-time All-American. Morrison was the 1999 NCAA singles champion. Nickitas was the 1996 and 1997 NCAA doubles champion. Travis was a two-way football player and an assistant coach between 1963 and 1966.

Comments
Topics mentioned in this article
NBA Udonis Haslem
Get the latest Cricket news, check out the India cricket schedule, Cricket live score . Like us on Facebook or follow us on Twitter for more sports updates. You can also download the NDTV Cricket app for Android or iOS.