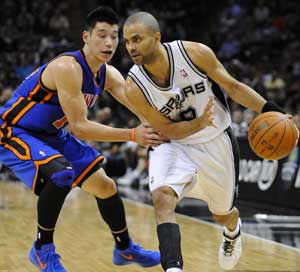 Tim Duncan and Manu Ginobili added 17 points apiece in Ginobili's second game back after missing two weeks with a strained stomach muscle. Like the Knicks, the Spurs are finally at full strength again, but are doing a far better job of blending rotations and fitting all their pieces together.

The Knicks have lost six of nine. They bear little resemblance to their Jeremy Lin-inspired resurgence before the All-Star break, and booting Landry Fields from the starting lineup before the game didn't help much.

Comments
Topics mentioned in this article
NBA Tony Parker DeJuan Blair Tim Duncan
Get the latest Cricket news, check out the India cricket schedule, Cricket live score . Like us on Facebook or follow us on Twitter for more sports updates. You can also download the NDTV Cricket app for Android or iOS.