Thunder steal another to put Lakers on brink

Kevin Durant hit the go-ahead three pointer with 13 seconds left to lift the Oklahoma City Thunder to a 103-100 win over Los Angeles to put the Lakers on the brink of elimination. 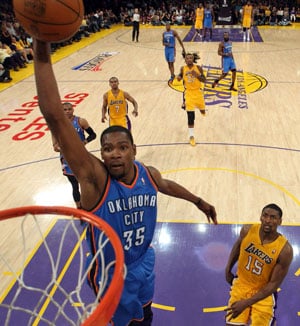 Kevin Durant hit the go-ahead three pointer with 13 seconds left to lift the Oklahoma City Thunder to a 103-100 win over Los Angeles to put the Lakers on the brink of elimination.

With the score tied 98-98 Durant hit a 25-foot jumper over Lakers Metta World Peace, capping a fourth quarter rally for the Thunder who trailed for much of Saturday's game.

"We just kept believing and helping each other out on defence. Everybody chipped in," said Durant.

The Lakers led by 13 points with just under eight minutes to play but the Thunder wouldn't quit, going on a 25-9 run to close the game spearheaded by Russell Westbrook and Durant.

Durant finished with 31 points, 13 rebounds and Westbrook had a team-high 37 points for the Thunder who lead the Western Conference series three games to one.

The Thunder can wrap up the series with a win in game five on Monday in Oklahoma.

Kobe Bryant once again carried the Lakers on his back, but he couldn't do it alone. Bryant scoring eight of his team's final 10 points and finished with a game-high 38 points, eight rebounds and five assists.

The Lakers were their own worst enemy at times as Pau Gasol made a bad pass that led to a turnover and the go-ahead three pointer, and then World Peace failed to guard Durant on the shot.

"I knew he would play off me a little bit so I got some space and I was able to knock it down," Durant said.

Guard James Harden drained two free throws with seven seconds left to make it 103-98 and help seal the win. Bryant hit a two pointer at the buzzer to close out the scoring.

Centre Andrew Bynum said the Lakers got complacent after they compiled their biggest lead of the game at 13 points.

Comments
Topics mentioned in this article
NBA Kevin Durant Oklahoma City Thunder Russell Westbrook
Get the latest updates on IPL 2021, check out the IPL 2021 Schedule and Indian Premier League Live Score . Like us on Facebook or follow us on Twitter for more sports updates. You can also download the NDTV Cricket app for Android or iOS.