Oklahoma City's Kevin Durant overcame a bruised left calf to score 34 points and lead the Thunder to a 97-75 win over the Indiana Pacers on Friday, moving the team level with San Antonio for top spot in the NBA's Western Conference. 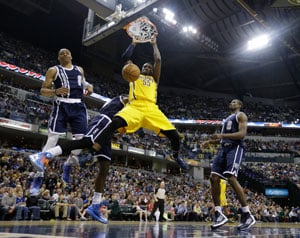 Oklahoma City's Kevin Durant overcame a bruised left calf to score 34 points and lead the Thunder to a 97-75 win over the Indiana Pacers on Friday, moving the team level with San Antonio for top spot in the NBA's Western Conference.

Russell Westbrook added 24 points for the Thunder, who beat the Spurs on Thursday, arrived at the team hotel in Indianapolis at 4 a.m., then went out and prevented the Pacers from clinching their first Central Division title in nine years.

But the Pacers, who got 22 points from Roy Hibbert, can clinch the title with a win Saturday at Washington.

Elsewhere, the Los Angeles Lakers held onto the last playoff position in the West by beating Memphis, Carmelo Anthony tied a franchise record as New York downed Milwaukee and won its 11th straight, a depleted Miami had enough in hand to defeat Charlotte, Houston edged closer to the playoffs with a win over Portland, and Philadelphia had its highest-scoring quarter of the season in beating Atlanta.

L.A. Lakers star Kobe Bryant had 24 points and nine assists while Pau Gasol added 19 in the 86-84 win over the Memphis Grizzlies, with Dwight Howard hitting the late winner.

The Lakers have won three straight in the final weeks of their desperate push for a postseason spot. Los Angeles also avoided getting swept in its season series with the Grizzlies, whose four-game winning streak ended.

Memphis' Mike Conley scored 21 points before missing a potential go-ahead jumper with 5 seconds left and another layup before the buzzer for the playoff-bound Grizzlies, who fell one game behind Denver for the fourth seed in the West. The Grizzlies couldn't score in the final 21/2 minutes.

J.R. Smith added 30 points for the Knicks, who used a 42-point third quarter to turn around the game after a lackluster first half.

The Heat won despite playing without LeBron James, Dwyane Wade and Ray Allen, who were held out while recovering from injuries.

Chris Bosh chipped in with 18 points and eight rebounds, for Miami, which needs three more victories to pass the franchise record of 61 wins in a regular season.

Rookie Michael Kidd-Gilchrist had 18 points and 14 rebounds for the Bobcats.

Houston's James Harden had 33 points as the undermanned Rockets won 116-98 at the Portland Trail Blazers.

Jeremy Lin added 22 points to help the Rockets to their fourth straight victory. Houston remained in seventh place in the Western Conference - three games in front of the L.A. Lakers - for their first playoff appearance in four years.

LaMarcus Aldridge returned from an ankle injury with 32 points and 13 rebounds for the Blazers, who matched their season-worst slide with a seventh straight loss.

The Philadelphia 76ers piled on 40 points in the first quarter to set up a 101-90 win at the Atlanta Hawks.

Evan Turner had 24 points and 11 rebounds while Spencer Hawes added 19 points and 12 rebounds for the 76ers, who made 16 of 22 shots in the opening term.

Dallas' Shawn Marion had 25 points and 12 rebounds in the Mavericks' 117-108 win at the Sacramento Kings.

Cleveland ended a 10-game losing skid with a 97-91 victory over the Boston Celtics, with Tristan Thompson having career highs with 29 points and 17 rebounds.

Chicago's Nate Robinson scored 12 of his 19 points in the fourth quarter to guide the Bulls to a tight 87-86 win over the Orlando Magic.

Toronto's Rudy Gay had 26 points and five rebounds to lead Toronto to a rare road victory in the Western Conference, winning 95-93 at the Minnesota Timberwolves.