The San Antonio Spurs swept the Utah Jazz out of the NBA playoffs on Monday holding on for an 87-81 win in game four of their Western Conference series. 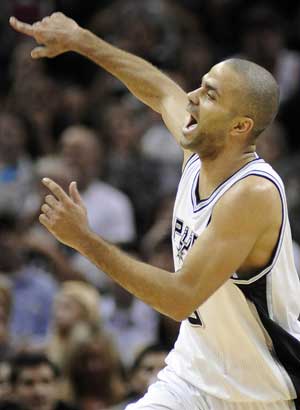 The San Antonio Spurs swept the Utah Jazz out of the NBA playoffs on Monday holding on for an 87-81 win in game four of their Western Conference series.

Manu Ginobili scored a team-high 17 points and Tim Duncan had 11 points and five rebounds for the top seeded Spurs who went on a 20-2 scoring run in the second half to seize command of the game.

"We didn't lose our composure. That was great," Duncan said. "We used the clock when we could. We took advantage of plays when we had to and found a way to close it out."

The Spurs wanted to avoid a similar fate to last season when they suffered an embarrassing first-round loss to eighth place Memphis.

France's Tony Parker had 11 points for the Spurs who beat the Jazz in four straight to reach the second round of the postseason where they will face either Memphis or the Los Angeles Clippers.

Al Jefferson tallied a game-high 26 points, Devin Harris had 19 points and Derrick Favors finished with 16 points and 10 boards for the Jazz who were trying to send the series to game five on Wednesday.

Utah is now 22-25 all-time in elimination games as no team in NBA history has ever come back from a 3-0 series deficit.

"It was a good experience, going out there, playing against the Spurs," Favors said. "It was a challenge."

San Antonio won 21 of their last 23 regular-season games as they surpassed the Oklahoma City Thunder for the West's top seed.

The Spurs shot 10-of-22 from beyond the arc, while the Jazz failed on all 13 of their three-point attempts.

San Antonio went on a scoring run in the fourth and then had to hold on at the end as Utah mustered a spirited rally of their own late in the fourth to make it close. The Jazz got within four, 83-79, with under a minute remaining.

But Ginobili helped seal the victory with an uncontested layup in the last minute after Utah's Paul Millsap bobbled a pass leading to a turnover.

Utah made the postseason as the eighth seed in the Western Conference. They were one of the youngest teams in the playoffs with seven players under the age of 26.

"I think it was a good learning experience for us," said Jazz forward Gordon Hayward.