Spurs rip Clippers for 16th win in a row 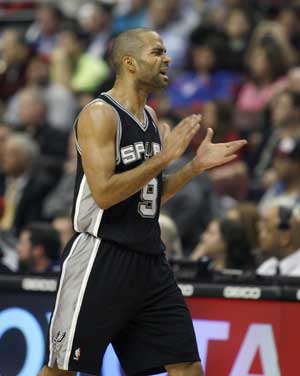 San Antonio took a 2-0 lead over the Clippers in the best-of-seven Western Conference second-round series, which continues with games three and four on Saturday and Sunday in Los Angeles.

The Spurs won their final 10 regular-season games and have opened the playoffs with six triumphs in a row.

French guard Parker, double-covered most of the night, also contributed five rebounds and five assists for the Spurs while Tim Duncan added 18 points and Boris Diaw, another Frenchman, contributed 16 points for San Antonio.

Parker, joking he could no longer deny he was an "old man", said he passed to Duncan and Diaw when shut down by the Clippers, but had more chances in the second half because of his teammates' scoring success.

"I had to be patient and get my teammates involved," Parker said. "In the second half I had more opportunities to do stuff. They were covering Timmy and more of our shooters so I was able to try attacking and go to the hoop a little more."

"Tony did the lion's share of work," Popovich said. "He played a great game defensively. He did a hell of a job.

"Tony played very, very aggressively and focused knowing full well he was going to be hit and doubled. He played through it and did a hell of a job."

Clippers coach Vinny Del Negro is still searching for ways to stop playmaker Parker, who shot 8-of-19 from the field.

"Tony has had a fantastic year," Del Negro said. "He's difficult to contend with in the open court and he has a lot of weapons around him. We have to do a better job of corralling him."

After winning 50 games to share the NBA's best regular-season record with Chicago, the Spurs have a home-court edge throughout the playoffs after the Bulls lost star Derrick Rose to an injury and were ousted by Philadelphia in the first round.

One reason for the Spurs' success has been the ability of Duncan and Parker to stay healthy during the grind of playing 66 games over four months as a consequence of the NBA money dispute that resulted in a compressed schedule.

"I feel unbelievable, better than I have for the last four or five years," Duncan said.

Duncan, 36, has been a member of all four Spurs' NBA championship squads.

"He is getting older but he is still the backbone of the program," Popovich said. "He's the one we build around. He continues to rebound and play defense. We have gone to him a lot in these playoffs. He's still one hell of a player."

Duncan was also the perfect option when Parker found himself double covered.

"It was vintage Tim," Parker said. "If they want to take me out, Timmy is going to have a lot of wide-open shots."

San Antonio seized command in the second half after the Clippers rallied late in the second quarter to pull within 46-42 at half-time.

Comments
Topics mentioned in this article
Football Los Angeles Clippers Tony Parker NBA
Get the latest Cricket news, check out the India cricket schedule, Cricket live score . Like us on Facebook or follow us on Twitter for more sports updates. You can also download the NDTV Cricket app for Android or iOS.