The San Antonio Spurs mowed down another opponent, using their guile under pressure to close out another perfect playoff series. 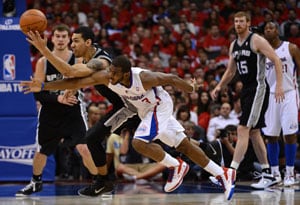 The San Antonio Spurs mowed down another opponent, using their guile under pressure to close out another perfect playoff series.

Tim Duncan scored 21 points, Tony Parker added 17 and the Spurs beat the Los Angeles Clippers 102-99 on Sunday night to win their second-round matchup 4-0 and advance to the Western Conference finals.

"They played great, they made it tough on us," Parker said. "The last 2 minutes we got the stops we needed. Everybody did something."

The Spurs extended their winning streak to 18 games and their playoff record to 8-0, tying the third-best postseason streak in franchise history.

"Until we go all the way, I can't compare this team," said Parker, who has won three NBA titles with the Spurs. "We're just trying to stay focused."

Danny Green and Gary Neal added 14 points each, and Manu Ginobili and Thiago Splitter had 11 each.

"We needed a game like that. It arrived at the perfect time," Parker said. "We battled. We executed our plays, made big baskets."

San Antonio could find out as soon as Monday night who it will play next. Oklahoma City leads the Lakers 3-1 in their series, with Game 5 on Monday.

The Spurs trailed much of the fourth until tying the game twice in the final 3:32 before their 30-something trio of Duncan, Parker and Ginobili took over most of the scoring.

"Their experience showed with their execution," Clippers coach Vinny Del Negro. "Tim looks great and the rest of the guys are feeding off that."

Chris Paul had 23 points and 11 assists, Blake Griffin added 21 points, and Eric Bledsoe had 17 for the Clippers, who blew a six-point lead in the fourth quarter when Paul faltered in the final two minutes, usually a time when the All-Star guard is at his best.

"We had our opportunities and we couldn't convert," Del Negro said. "We made our mistakes at some key moments and that was the difference."

Both nursing injuries, Griffin and Paul combined to score 21 of the Clippers' 28 points in the third quarter when they took their first lead of the game. In the fourth, Bledsoe came up big, scoring 11 in a row, to extend the lead to 90-85 with 5:38 remaining.

After Reggie Evans missed two free throws, Green hit a 3-pointer to tie it at 92.

Duncan's hook put the Spurs in front 96-94 before Paul tossed up a one-handed shot that rose to the top of the backboard before dropping straight in as he crashed into a baseline photographer. He made the free throw to put the Clippers ahead by one.

Parker scored consecutive baskets and the Spurs regained the lead, 100-97, with 1:47 left.

Paul's two free throws drew the Clippers within one. After a timeout, Paul drove the basket and lost the ball. He fouled Green, who made the first and missed the second to keep the Spurs ahead for good.

Comments
Topics mentioned in this article
DeJuan Blair Tim Duncan Los Angeles Clippers NBA Tony Parker San Antonio Spurs
Get the latest Cricket news, check out the India cricket schedule, Cricket live score . Like us on Facebook or follow us on Twitter for more sports updates. You can also download the NDTV Cricket app for Android or iOS.