It seemed to be a close game when the Spurs closed the first quarter 24-20 and the first half 50-44. However, Green and Neal pulled their trigger in the second half, helping the Heat to lead for more than 20 points. 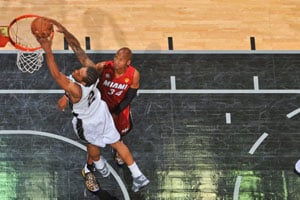 Both Green and Neal did excellent job beyond the arch. Green knocked down seven three pointers, only missing two attempts, while Neal buried six out of 10. Green scored a game high 27 points and Neal, coming from the bench, added 24. The Spurs duo combined 51 points, outscoring the 43 from the "Big Three" (16 from Dwyane Wade, 15 from LeBron James and 12 from Chris Bosh).

"Not getting down if things didn't go well, to continue to push and to work, and to Danny's credit, he's done that," said Spurs coach Gregg Popovich about Danny Green, who had been cut twice during the last couple of year. Green led all players with 56 points after the first three Finals games, six more than James, Xinhua reports.

"My teammates did a good job of finding me and encouraging me to shoot every time when I'm open. Pop does a great job telling us let it fly."

"Well, we got what we deserved tonight," said Heat coach Erik Spoelstra.

"They got into an incredible rhythm, even in the first quarter. Every shot they wanted to get they got. We didn't disrupt them."

It seemed to be a close game when the Spurs closed the first quarter 24-20 and the first half 50-44. However, Green and Neal pulled their trigger in the second half, helping the Heat to lead for more than 20 points. The Heat saw the hope after trimming the gap to 15 points at the end of the third period, only to see the Spurs extend the advantage to 28 after opening the fourth quarter 13-0.

The 36-point margin turned out to be the third largest score difference in NBA Finals history. Heat MVP core LeBron James made only seven out of his 21 attempts throughout the game, finishing at 15 points and 11 rebounds. "I can't have a performance like tonight and expect to win," said James.

"I've got to shoot the ball better, make the better decisions and I will get into the film and see ways that I can do that."

Game 4 is a must-win game for the Heat. The top seed of the league would face early elimination if the score turns to 3-1 on Thursday night.