The New York Knicks extended their winning streak to five games as J.R. Smith scored 32 points and Carmelo Anthony added 29 in a 100-85 victory over the Boston Celtics on Tuesday. 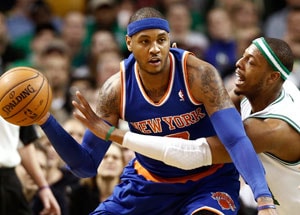 The New York Knicks extended their winning streak to five games as J.R. Smith scored 32 points and Carmelo Anthony added 29 in a 100-85 victory over the Boston Celtics on Tuesday.

The win moved the Knicks into second place in the Eastern Conference, percentage points ahead of the Indiana Pacers. The Celtics, who could face the Knicks in the first round of the playoffs, lost their fifth game in a row and remained in seventh.

The Celtics, playing their second straight game without Kevin Garnett, were led by Jeff Green with 19 points and Paul Pierce with 16.

Minnesota's Nikola Pekovic had 18 points and 11 rebounds to lead the Timberwolves to a rare road win, 105-82 over the Detroit Pistons.

The game matched one of the league's worst home teams against one of the worst on the road. The Pistons haven't won at home since before the All-Star break, losing seven straight, while Minnesota had lost 10 of its last 11 road games.

Greg Monroe had 11 points and 12 rebounds for Detroit, while point guard Jose Calderon scored 14 points but only had one assist.

At Dallas, Dirk Nowitzki had a season-high 33 points as the Mavericks moved within a game of .500 for the first time since mid-December with a 109-102 victory against the Los Angeles Clippers.

More importantly for the Mavericks, they're just a game behind the Los Angeles Lakers for the final playoff spot in the West with 11 games remaining. They've won nine of their past 12 and improved to 1-11 against the top four teams in the West.