Sim Bhullar has been signed up by NBA team Sacramento Kings. 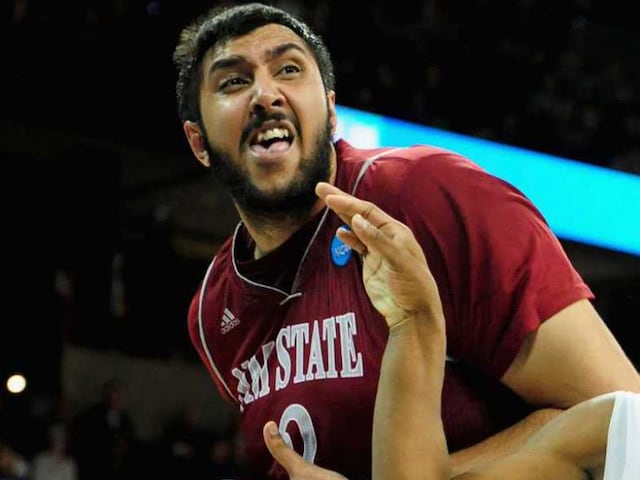 Sim Bhullar has been signed up by NBA team Sacramento Kings.© AFP

The Sacramento Kings signed center Sim Bhullar to a contract, according to Kings General Manager Pete D'Alessandro. As per team policy, terms of the deal were not disclosed. Born in Toronto, Bhullar becomes the first player of Indian descent to sign with an National Basketball Association (NBA) team. The 7-foot-5, 360-pound center was a member of the Kings squad that captured the 2014 Samsung NBA Summer League title in Las Vegas.

In his two seasons at New Mexico State, the Aggies standout averaged 10.2 points and 25.3 minutes per game in 65 career games. Bhullar was a two-time Western Athletic Conference Tournament MVP, helping the school reach the NCAA Tournament in 2013 and 2014. As a freshman, he was named WAC Freshman of the Year. He set a single-season school record for most blocked shots with 85.

"I've long believed that India is the next great frontier for the NBA, and adding a talented player like Sim only underscores the exponential growth basketball has experienced in that nation," said Kings owner Vivek Ranadive. "While Sim is the first player of Indian descent to sign with an NBA franchise, he represents one of many that will emerge from that region as the game continues to garner more attention and generate ever-increasing passion among a new generation of Indian fans."

Understanding the ultimate power of sports is to connect people across geographic, economic and cultural lines, Ranadive is focused on making the Sacramento Kings the premier sports franchise of the 21st century. Working with the NBA, the Kings have successfully catapulted basketball into the fastest growing sport in India.

During the past NBA 2013-14 season, the Kings televised over 20 live games in India, launched a website in Hindi to connect with a rapidly growing Hindi-speaking fan base from around the world, sent the Sacramento Kings players and dancers to Mumbai, and signed the team's first India-based sponsor.

Comments
Topics mentioned in this article
NBA Sacramento Kings
Get the latest Cricket news, check out the India cricket schedule, Cricket live score . Like us on Facebook or follow us on Twitter for more sports updates. You can also download the NDTV Cricket app for Android or iOS.