The Los Angeles Lakers overcame the absences of Dwight Howard and Metta World Peace, and the loss of Pau Gasol to beat the Brooklyn Nets 92-83 on Tuesday. 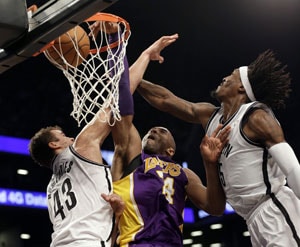 The Los Angeles Lakers overcame the absences of Dwight Howard and Metta World Peace, and the loss of Pau Gasol to beat the Brooklyn Nets 92-83 on Tuesday.

Kobe Bryant had 21 points and eight rebounds, while Antawn Jamison, starting for the suspended World Peace, made the go-ahead basket during a closing 14-3 run for the Lakers, who have won three straight and six of their last seven games.

Howard missed his third consecutive game with a torn labrum in his right shoulder and Gasol, his replacement, appeared to injure his right foot with a little more than 4 minutes remaining.

Paul George scored 29 points at Indianapolis to lead the Indiana Pacers over the Atlanta Hawks 114-103 for its 15th straight home win.

David West had 15 points and seven rebounds and George Hill added 15 points and eight assists to help the Pacers to their fourth straight victory overall and their longest home win streak in 13 years.

Jeff Teague had 24 points and eight assists to lead the Hawks, who have lost three of their last four.

The Houston Rockets equaled an NBA record and set a club mark with 23 3-pointers in a 140-109 win over the Golden State Warriors.

Jeremy Lin scored 28 points, including a career-high five 3-pointers, and Chandler Parsons and James Harden hit four 3s apiece as the Rockets reached a season-high point total. They also tied an NBA record with 14 3-pointers in the first half and had a season-high 35 assists on 46 field goals overall.

Jarrett Jack scored 20 points and David Lee had 18 for the Warriors.

Phoenix guard Goran Dragic scored 15 of his 17 points in the fourth quarter to lead the Suns past the Memphis Grizzlies 96-90.

After the score was tied at 88-88, Dragic scored six straight points to put the game away.

Marcin Gortat led the Suns with 20 points, while Jermaine O'Neal had 14 points.

At Denver, Danilo Gallinari and Ty Lawson each scored 22 points to help rally the Nuggets to their seventh straight victory, 112-104 over the Milwaukee Bucks.

The Nuggets withstood Samuel Dalembert's career-high 35 points and trailed by 17 points in the first half before coming back to beat the Bucks for the fifth time in a row and get their longest winning streak overall in more than two years.