Oklahoma City and Memphis continued their impressive starts to the NBA season with hard-fought wins on Tuesday while the Miami Heat suffered a shock defeat by a Washington team that went into the game with a 1-13 record. 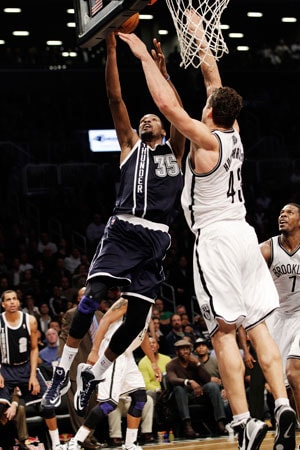 Oklahoma City and Memphis continued their impressive starts to the NBA season with hard-fought wins on Tuesday while the Miami Heat suffered a shock defeat by a Washington team that went into the game with a 1-13 record.

Oklahoma City Thunder seemed to be making light work of a seemingly difficult assignment away to the Brooklyn Nets when they cruised to a 16-point lead. However Brooklyn rallied and whittled the gap down to just two points, only for the Thunder to steady and notch a 117-111 win.

Kevin Durant scored 32 points and Russell Westbrook had 25 points and nine assists as Oklahoma City brought up a sixth straight victory. They also became the first team in 15 years to pass 100 points in 10 straight games.

Deron Williams scored a season-high 34 points for the Nets, who had their six-game home winning streak snapped.

The Memphis Grizzlies had an even tighter game, needing overtime and a banner performance by Zach Randolph to beat the Phoenix Suns 108-98.

Randolph set season highs with 38 points and 22 rebounds. He was 15 of 22 from the field and dominated in the latter stages of the fourth quarter and early minutes of overtime. Memphis outscored the Suns 14-4 in the extra period, with all the Suns' points coming at the foul line.

Quincy Pondexter had a season-high 16 points for Memphis, while Goran Dragic had 19 for the Suns.

The shock of the day, and perhaps the season, was the Washington Wizards 105-101 win over Miami.

The Wizards doubled their victory total this season, despite LeBron James' triple-double of 26 points, 13 rebounds and 11 assists.

Jordan Crawford led Washington with 22 points, including three free throws in the final 11 seconds, while James missed a potentially tying 3-pointer with 3.9 to go. That was characteristic of the Heat throughout the night, as they made only 8 or 28 3-point attempts and saw their six-game streak ended.

The Minnesota Timberwolves win over the Philadelphia 76ers was not quite as much of a shock but the 105-88 road win was impressive nonetheless.

Josh Howard had 16 points and 10 rebounds, and Alexey Shved hit four 3-pointers and scored 17 points for the Timberwolves, who raced to a 23-point lead in the first half.

The Timberwolves made 11 of their first 19 3-point attempts after coming in shooting a woeful 27 percent from long range this season.

The Houston Rockets put in a storming finish to overrun the Los Angeles Lakers and record a 107-105 home win.

Toney Douglas had a season-high 22 points and Greg Smith added a career-best 21 as Houston overcame a 13-point deficit with less than 10 minutes to go. The Rockets used two big runs, including a 9-2 spurt, to take a 100-99 lead with about 2 1/2 minutes left.

Kobe Bryant hit a 3-pointer with 13.3 seconds left to cut the lead to 106-105 before fouling Douglas, who made one of two free throws with 8.8 seconds left. Bryant missed a 3-point attempt before Metta World Peace - formerly Ron Artest - missed a putback to give Houston the win.

Bryant led the Lakers with 39 points.

It was similarly close in Chicago, where the Indiana Pacers edged the Bulls 80-76.

The Bulls were able to keep David West, Indiana's leading scorer, in check - but Paul George picked up the slack with 34 points while Roy Hibbert added 10 points and 11 rebounds for the visitors.

Nate Robinson scored 19 off the bench for the Bulls.

Comments
Topics mentioned in this article
NBA Marina Erakovic
Get the latest updates on IPL 2020, check out the IPL Schedule for 2020 and Indian Premier League (IPL) Cricket live score . Like us on Facebook or follow us on Twitter for more sports updates. You can also download the NDTV Cricket app for Android or iOS.