Retired National Basketball Association star Shaquille O'Neal has signed a deal to join Turner Sports to serve as an analyst. 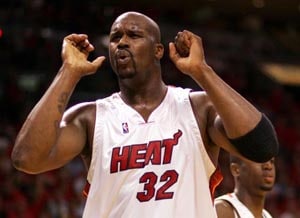 Retired National Basketball Association star Shaquille O'Neal has signed a deal to join Turner Sports to serve as an analyst.

The four-time NBA champion will join Charles Barkley, Kenny Smith and Ernie Johnson as part of TNT's NBA show, beginning in the 2011-12 season. He will also add his comments to NBA TV and NBA.com.

"I'm just going to try to make it more fun than it already is," said O'Neal, who retired last month.

The 7-foot, 1-inch O'Neal played 19 seasons in the NBA and is one of the league's most colourful personalities.

"I have the ability and the backing to give fair criticism. The only time I have trouble with people giving criticism is when they haven't walked that walk," O'Neal said. "I've walked many walks in my 19-year career, so I think any criticism that I give should be fair."

Slowed by injuries, the 15-time all-star decided to retire last month. He is fifth all-time on the league scoring list.

He has also done films in the past and said he hopes to get more involved in producing TV shows and working on cartoons.

Comments
Topics mentioned in this article
NBA Kobe Bryant Boston Celtics
Get the latest updates on ICC Women's Cricket World Cup 2022 and IPL 2022, check out the Schedule , Live Score and IPL Points Table. Like us on Facebook or follow us on Twitter for more sports updates. You can also download the NDTV Cricket app for Android or iOS.