Larry Sanders scored 13 of his career-high 21 points in the third quarter and the Milwaukee Bucks rallied to beat the Los Angeles Lakers 113-103 on Thursday. 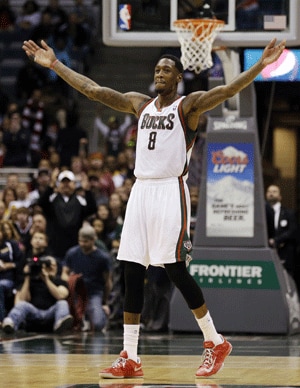 Larry Sanders scored 13 of his career-high 21 points in the third quarter and the Milwaukee Bucks rallied to beat the Los Angeles Lakers 113-103 on Thursday.

Sanders was 8 of 11 from the floor and had 13 rebounds. Ersan Ilyasova and Brandon Jennings each had 20 points, Monta Ellis added 18, and Marquis Daniels had 16 to help the Bucks end a four-game losing streak.

Kobe Bryant led the Lakers with 30 points, leaving him four points behind Wilt Chamberlain (31,419) for fourth place on the NBA's career list. Dwight Howard had 15 points and 15 rebounds, and Steve Nash scored 16 points.

Following the loss, the Lakers revealed Bryant was suffering from a bone spur his left foot. He left the arena using one crutch, but appeared to be walking without pain after his 361/2 minutes on court.

"Inflamed on me. I'll be all right," Bryant later told Yahoo Sports.

Ellis scored eight points for Milwaukee during a late 12-3 run, making it 102-92 and when the Lakers turned it over on the next possession, Daniels raced down the court and dunked to make it 104-92 with 4:12 left. The Lakers never got closer than eight the rest of the way.

The Lakers' last gasp came early in the fourth. Antwan Jamison scored twice and Howard dunked in a miss to help the Lakers regain the lead at 83-82. The teams exchanged the lead four times before Jennings' 3-pointer at 8:23 put Milwaukee ahead for good.

In Dallas, Paul George had 24 points and eight rebounds and the Indiana Pacers broke open a close game in the third quarter to beat the Dallas Mavericks 103-78 and give the Pacers a half-game lead for the second-best record in the Eastern Conference.

George scored 13 points in the third, including eight in a 20-5 run that broke open a deadlocked game at halftime and gave the first-place Pacers their fourth straight win.

Dirk Nowitzki scored 21 points for Dallas, which remained 11/2 games behind the Los Angeles Lakers in the race for the final playoff spot in the Western Conference.

In a late game on Thursday, DeMarcus Cousins scored 17 consecutive points in the first half and finished with 34 in the Sacramento Kings' 117-103 victory over the Phoenix Suns.