The San Antonio Spurs shook off the disappointment at a $250,000 fine imposed by the NBA to beat Memphis 99-95 in overtime on Saturday, knocking the Grizzlies off their perch atop the league standings. 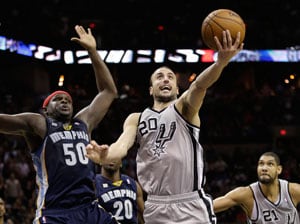 The San Antonio Spurs shook off the disappointment at a $250,000 fine imposed by the NBA to beat Memphis 99-95 in overtime on Saturday, knocking the Grizzlies off their perch atop the league standings.

The Spurs were hit by the fine for resting four starting players against Miami without any notice. Possibly invigorated by that fine, or perhaps just well rested, Tony Parker scored 30 points while Tim Duncan had 27 points and 15 rebounds in the win over Memphis.

Coach Greg Popovich said he was disappointed by Commissioner David Stern's decision and ruled out neither an appeal, nor a possible repeat of the ploy in future busy scheduling.

Marc Gasol scored 20 points for the Grizzlies, who slipped to a 12-3 record, falling into a tie with Miami for the overall NBA lead.

The Heat grabbed that share of the lead by downing the high-flying Brooklyn Nets 102-89, having trailed at one stage by 14 points.

Dwyane Wade scored a season-high 34 points and LeBron James added 21 for the Heat, who won their sixth straight and 12th in a row over the Nets, restricting Brooklyn to just 30 points in the second half.

Andray Blatche scored 20 points for Brooklyn, which lost the lead in the Atlantic Division, slipping half a game behind New York.

Oklahoma City stayed locked with the Spurs on a 14-4 record by cruising past the New Orleans Hornets 100-79, having built a 27-point lead after three quarters.

Kevin Durant scored 20 points, Russell Westbrook added 18 points and 10 assists for the Thunder, which has won five straight; the past four by double digits.

Ryan Anderson had 21 points and 10 rebounds for New Orleans, but was only 3 of 11 on 3-point attempts, normally his strength.

The Golden State Warriors and Los Angeles Clippers - so often the also-rans in the Pacific Division - stayed locked together atop that frame as both notched comfortable wins.

The Warriors downed the Indiana Pacers 103-92 as Stephen Curry had 20 points and a season-high 11 assists.

Klay Thompson scored 22 points for the surprising Warriors, who went out to a 16-point lead in the third quarter to notch a third straight win. David West scored 23 points for the Pacers.

The Clippers routed the Sacramento Kings 116-81, with seven players in double figures for points, led by Jamal Crawford's 17 points off the bench.

Los Angeles was able to rest all its starters in the fourth quarter, with Blake Griffin finishing on 14 points and nine rebounds.

The Chicago Bulls had a 93-78 win over the Philadelphia 76ers in a reprise of last year's first-round playoff series.

Luol Deng scored a game-high 25 points; making it consecutive games in which he topped the score sheets.

Richard Hamilton added 15 points for the Bulls, while Jrue Holiday led the 76ers with 23 points.

The Houston Rockets made it five straight home wins with a 124-116 win over the Utah Jazz in a rich display of shooting skills by both teams.

Patrick Patterson scored 20 points and Chandler Parsons and Jeremy Lin had 19 apiece for the Rockets, who shot 55 percent (46 of 83) and hit half of their 3-point shots at 11 of 22.

The Milwaukee Bucks recovered from an awful start, trailing 17-0, to overrun the Boston Celtics and win 91-88.

Larry Sanders put on a show with 18 points, 16 rebounds and five blocked shots for the Bucks while Monta Ellis had 17 points.

The Dallas Mavericks had a 92-77 win over the Detroit Pistons. O.J. Mayo broke out of a shooting slump with 27 points while veteran Derek Fisher came out on the winning side in his Mavericks debut.

The close finish of the day came in Cleveland, where the Portland Trail Blazers edged the Cavaliers 118-117, thanks to Nicolas Batum's 3-pointer with 0.2 seconds on the clock in double overtime.

Comments
Topics mentioned in this article
Marina Erakovic NBA
Get the latest updates on IPL 2021, IPL Points Table , IPL Schedule 2021 , live score . Like us on Facebook or follow us on Twitter for more sports updates. You can also download the NDTV Cricket app for Android or iOS.