Miami Heat defeated the Indiana Pacers 117-92 on Friday to win the other league semi-final in six games and punch their ticket to their fourth straight finals. The Heat will be well rested for game one having had five days off.

Tim Duncan scored seven of his 19 points in overtime as San Antonio Spurs beat Oklahoma City Thunder 112-107 in game six on Saturday to set up an NBA finals rematch with the Miami Heat. 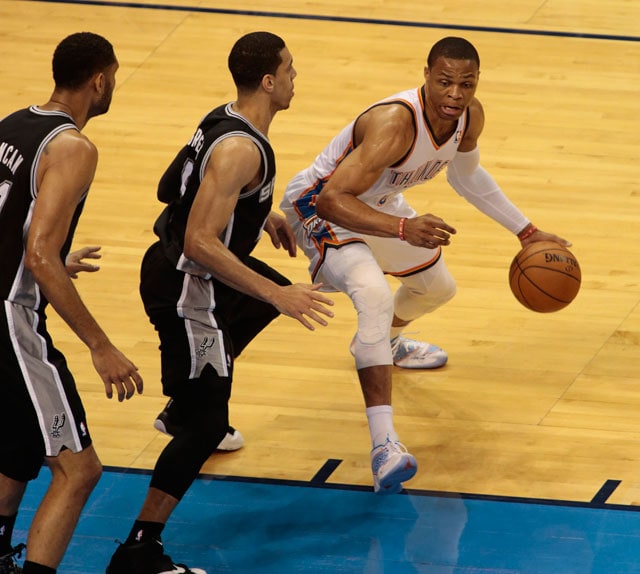 Duncan also added 15 assists and power forward Boris Diaw came off the bench to score 26 points for the Spurs, who won the Western Conference final series four games to two.

"This victory is really sweet because we know we played one helluva team," said Spurs coach Gregg Popovich.

San Antonio will host the first game of the National Basketball Association finals on Thursday against the two-time defending champion Heat, who beat them in seven games last season.

Miami defeated the Indiana Pacers 117-92 Friday to win the other league semi-final in six games and punch their ticket to their fourth straight finals. The Heat will be well rested for game one having had five days off.

This is the first NBA finals rematch since the Chicago Bulls battled the Utah Jazz in 1997 and 1998.

The Spurs won Saturday despite playing the second half without star guard Tony Parker, who played just 19 minutes before leaving the game with a foot injury.

Kawhi Leonard finished with 17 points and 11 rebounds and reserve Manu Ginobili scored 15 points for the Spurs, who hope to take advantage of home court during the series with Miami.

The Heat won last year, but San Antonio is looking forward to redemption. They have won four titles since Duncan joined forces with Popovich in Texas.

"It is unbelievable to have regained our focus after that devastating loss last year," said Duncan. "We've got that bad taste in our mouth from last time."

Kevin Durant finished with 31 points and 14 rebounds for the Thunder, who had their nine-game home win streak against San Antonio snapped.

Russell Westbrook scored 34 points and had eight assists while Reggie Jackson finished with 21 points for Oklahoma City, who staved off elimination two times previously in these playoffs.

"We settled for too many jump shots and we turned the ball over," said Thunder coach Scott Brooks. "Defensively they had us scrambling around. And they made some big plays."

San Antonio trailed 49-42 at the half, but managed to chip away and take the lead. They then went on a 9-0 burst to end the third quarter, stretching their lead to 10 points, 79-69, heading into the fourth. And they accomplished the feat without their star guard Parker.

"It was hard when we heard Parker wasn't going to play," said Ginobili. "We knew that if we got our game together and got aggressive we will have a shot. We got over the hump in the third quarter."

With 32 seconds left in the third, Diaw finished off some nice ball movement by the Spurs to make it 75-69.

San Antonio's Danny Green then made a four-point play on the Spurs' final possession. Green drained a three-pointer from the right side but was fouled by Durant. He went to the line and calmly sank the free throw to cap the scoring in the quarter.

Both teams made superb defensive plays in the overtime. Serge Ibaka blocked Ginobili's layup with 48 seconds left and on the next possession Leonard stole the ball from Thunder guard Westbrook before taking it down the court where Duncan hit a field goal to cut the San Antonio lead to 110-107 with 19 seconds left in overtime.

Diaw made two free throws to cap the scoring for the Spurs with just five seconds on the clock.

Ginobili said they are ready for LeBron James and the Heat. "We worked eight months really hard. We had a very successful season and all it did was to get us to this point again for another shot," Ginobili said. "We are going to give everything we got to try and get the trophy again.

"We know we are facing a very talented and tough team and it is going to be rough."