The San Antonio Spurs reclaimed a share of the NBA's second-best record with a 110-99 win over the Milwaukee Bucks on Wednesday, due mostly to a season-high 53 rebounds. 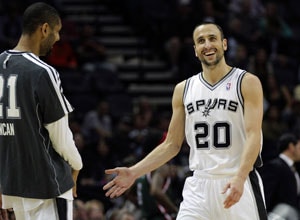 The San Antonio Spurs reclaimed a share of the NBA's second-best record with a 110-99 win over the Milwaukee Bucks on Wednesday, due mostly to a season-high 53 rebounds.

Tony Parker and Gary Neal each scored 22 points for the Spurs, who joined Oklahoma City on a 15-4 record, trailing on winning percentage behind the Memphis Grizzlies on 13-3.

Monta Ellis had 21 points and 11 assists for Milwaukee, but the Bucks lost their grip on the game late in the third and early in the final quarters when San Antonio put together a 36-15 run.

The best record in the Eastern Conference belongs to the New York Knicks, who moved to 13-4 with a buzzer-beating winner at the Charlotte Bobcats, winning 100-98.

The Bobcats appeared in position to win after a miss by Raymond Felton with 14 seconds left, but rookie Michael Kidd-Gilchrist made an ill-advised pass and J.R. Smith intercepted it. Aftera timeout, Smith drove to the left wing and hit a fallaway jumper as time expired to give New York the win.

Carmelo Anthony scored 20 of his 23 points in the first half for New York while Kemba Walker scored 25 points for the Bobcats.

The most authoritative performance of the day was the Los Angeles Clippers 112-90 win over the Dallas Mavericks.

The Clippers shot 50 percent and dominated throughout, keeping Dallas owner Mark Cuban glued to his seat with his head in his hand.

Blake Griffin had 19 points and 13 rebounds, and Chris Paul added 14 points and 13 assists for L.A. while Vince Carter topped the Mavericks scorers with 16 points off the bench.

The Atlanta Hawks had a 108-104 win over the Denver Nuggets and crept within 1-1/2 games of Southeast Division leader Miami, which suffered a shock loss to lowly Washington on Tuesday.

Birthday boy Josh Smith's steal, jam and free throw with 31 seconds remaining extended Atlanta's lead and the Hawks held on. Smith had 16 points and 13 rebounds, while Al Horford led the Hawks with 25 points and 12 rebounds.

The Indiana Pacers put together a 31-14 third quarter to draw clear of the Portland Trail Blazers and go on to notch a 99-92 win.

Paul George scored 22 points and George Hill for the Pacers, who had their lead trimmed to four points in the final quarter but held on. Damian Lillard led Portland with 23 points.

The Boston Celtics extended their dominance of the Minnesota Timberwolves with a 104-94 win. Kevin Garnett had 18 points and 10 rebounds to beat his old team. Since he left Minnesota for Boston, the Celtics have a 10-0 head-to-head record.

Boston's Rajon Rondo returned from a two-game suspension and had 17 points and 11 assists. Kevin Love had 19 points and 13 rebounds for the T-Wolves.

The Golden State Warriors started their seven-game Eastern trip in promising fashion with a 104-97 win over the Detroit Pistons.

Golden State's Klay Thompson scored 19 of his 27 points in the third quarter while Stephen Curry finished with 22 points and 10 assists.

Detroit had won its previous five home games but Tayshaun Prince was the only Pistons starter to reach double figures with 24 points.

Another player to put in a decisive third-quarter performance was Utah's Al Jefferson, who powered the Jazz to an 87-81 win over the Orlando Magic.

Jefferson had just eight points at halftime but scored 17 in the third quarter and was the difference as the Jazz held off a furious Orlando comeback attempt. Jefferson finished with a season-high 31 points and grabbed 15 rebounds.

Utah trailed 79-78 but Randy Foye's 3-pointer and back-to-back jumpers by Jefferson sealed it for the hosts. Glen Davis led Orlando with 18 points.

In Wednesday's other games, Kobe Bryant became the fifth player to pass 30,000 career points by sinking 29 as the Los Angeles Lakers beat the New Orleans Hornets 103-87; Chicago's Marco Belinelli scored a season-high 23 points to lead the Bulls to a 95-85 win over the struggling Cleveland Cavaliers; while Sacramento's DeMarcus Cousins had 25 points and 13 rebounds to help the Kings beat the Toronto Raptors 107-100.

Comments
Topics mentioned in this article
NBA Tony Parker
Get the latest Cricket news, check out the India cricket schedule, Cricket live score . Like us on Facebook or follow us on Twitter for more sports updates. You can also download the NDTV Cricket app for Android or iOS.