Tim Duncan had 23 points and 11 rebounds and the San Antonio Spurs remained the hottest team in the NBA, beating the Indiana Pacers 112-103 for their seventh consecutive win on Saturday night. 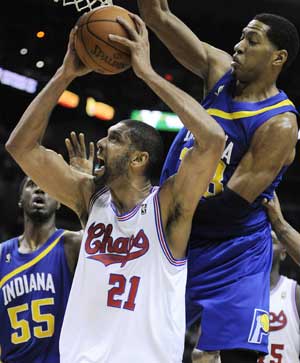 Tim Duncan had 23 points and 11 rebounds and the San Antonio Spurs remained the hottest team in the NBA, beating the Indiana Pacers 112-103 for their seventh consecutive win on Saturday night.

Tony Parker and Manu Ginobili added 18 points apiece. The Spurs are 8-1 since making a rare plunge into midseason moves by adding forwards Stephen Jackson and Boris Diaw, giving what Duncan calls the deepest San Antonio bench of his career.

Paul George and Danny Granger each scored 18 for Indiana. The Pacers have lost two of three while trying to break out of the logjammed East playoff picture and secure some home-court edge.

The Spurs aren't budging in the standings, either. They're 21/2 games behind first-place Oklahoma City and remain stuck behind the similarly streaking Thunder.

Gary Neal scored 11 points and Tiago Splitter added 10 as the Spurs showed off their newfound depth. Their bench outscored Indiana's 52-29.

David West and Roy Hibbert scored 15 points apiece for the Pacers, and Tyler Hansbrough added 12 off the bench. Indiana shaved a 22-point deficit to get within seven points with 5 minutes to go, but the Spurs instantly answered with a 7-2 run in the span of about 11/2 minutes to put the game safely out of reach.

Jackson had eight points for the Spurs, shooting 2 of 7 from the field.

Jackson is averaging around 10 points off the bench since coming back to San Antonio in a trade-deadline deal with Golden State. Jackson proved essential to the Spurs during their title run in 2003, and they hope his return recaptures some of that magic while gunning for a fifth title in the Duncan era.

Spurs coach Gregg Popovich, who doubles as team president, also bolstered his frontcourt this month by signing Diaw and added point guard Patty Mills. Seldom have the Spurs been so active on the NBA market in the middle of a season.

Popovich is counting on his new depth in the final month. The Spurs finish the season with 16 games in 23 days, including six back-to-backs. Popovich said he still isn't comfortable playing Ginobili on consecutive nights, since his playmaking guard has already missed more than half the season banged up.

Last season, Ginobili was hurt in a meaningless regular-season finale, which helped sink the Spurs in a stunning first-round playoff ouster. It's not a scenario Popovich wants to repeat - but his stars also resist sitting out.

"I always have to fight Manu and Timmy," Popovich said before tipoff. "I've won a couple battles."

Comments
Topics mentioned in this article
NBA Tony Parker DeJuan Blair Tim Duncan
Get the latest updates on Olympics 2020, Olympics 2020 Medal Tally, Live Cricket Score . Like us on Facebook or follow us on Twitter for more sports updates. You can also download the NDTV Cricket app for Android or iOS.