Jetlagged or not, the Sacramento Kings were determined not to be the team the Charlotte Bobcats beat to end their long losing streak. 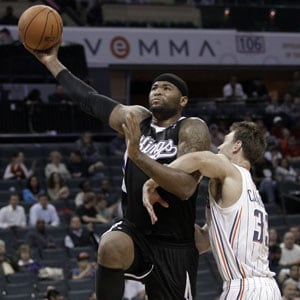 Jetlagged or not, the Sacramento Kings were determined not to be the team the Charlotte Bobcats beat to end their long losing streak.

The Kings made the most of a rare late-season cross country trip to the East coast and throttled the hapless Bobcats 114-88 on Sunday night behind a dominant effort from DeMarcus Cousins, who had 29 points and 10 rebounds. It was Charlotte's franchise-record 20th straight loss.

The Kings had lost nine of their previous 10 games, but this one was never in doubt as they scored 78 points inside the paint and led by 35 in the fourth quarter.

Cousins did most of the damage in the lane, but Tyreke Evans was masterful in slicing his way through a non-existent Bobcats defense, hitting 10 of 11 shots from the field - most of them on drives to the lane - and finishing with 22 points.

Jason Thompson flirted with a triple double, finishing with 14 points, 11 rebounds and seven assists for the Kings.

"We did a good job getting to the hole," Cousins said. "They didn't have a lot of size and we took advantage of it."

"It's difficult," Silas said. "We only have three big men (because of injuries) and it's been hard on these guys to keep going. That's basically all we have. When a team comes like they have with big guys and they're banging it is hard."

Kemba Walker had 13 points and 11 assists for the Bobcats, who are nearing an NBA record for futility.

If the Bobcats (7-56) lose their final three games, they'll finish with the worst winning percentage in league history. They travel to face Washington and Orlando before closing the regular season at home on Thursday night against New York.

The 26-point win was the largest margin of victory this season for the Kings.

About the only thing that didn't go right was Cousins picking up his 13th technical foul, which comes with an automatic one-game suspension. Cousins appeared to exchange words with rookie Bismack Biyombo as the two ran back down the court after a Sacramento basket, drawing a double technical.

Cousins shook his head when asked about it after the game, saying, "It's part of being DeMarcus Cousins."

He said he plans to appeal to the league.

The Bobcats simply had no answers defensively for the Kings, who scored at will in the lane and made the most of their transition game, scoring 38 points on fast breaks.

Evans was almost unstoppable when he put the ball on the floor, seemingly driving to the hole as easy as a knife going through warm butter.

"When he is in an aggressive mode, there are very few people who can keep him in front," Kings coach Keith Smart said. "And then if he doesn't look to attack, he gets his teammates involved. I'm trying to grow him into a new position and he's still going to have the ball in his hands 60 percent of the time. It's only going to help him. It's going to bring his whole game and career on top to where he wants it to be."

The Kings came in with the NBA's worst defense, giving up 104.6 points per game, but the Bobcats only shot 44 percent and managed 88 points. It was the first time in 39 games the Kings held an opponent to fewer than 93 points.

"The biggest thing now is having some pride as men," said Bobcats forward Tyrus Thomas. "Not so much as basketball players. We've got to fight it out every second until the horn blows."

This horn might as well have blown in the first quarter of this one.

The Kings started quickly, bolting to a 22-6 lead eight minutes into the game after shooting 65 percent from the field.

All but four of those points came inside the paint and 11 came in transition.

Sacramento didn't let up, building a 59-44 lead at the half behind 55 percent shooting.

Cousins scored 20 of his points in the second half as the Kings pushed their lead to 26 in the third quarter.

"When we flew in last night, we knew a fast start was something we needed to do," Smart said. "I thought we had the right energy from our starting lineup. We got off to the great start that we needed and we sustained it through the half. We were a little lethargic to start the second half, but I kept the starters out too long because the other guys were playing well. But they regrouped and got it back together."