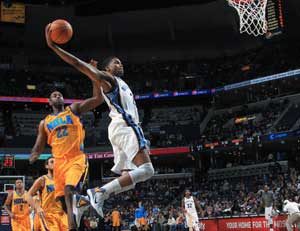 Jarrett Jack led New Orleans with 23 points, while Jason Smith had 15, including 10 in the fourth quarter as the Hornets cut into the lead. Greivis Vasquez scored 14 points and handed out six assists. Marco Belinelli contributed 10 points.

Memphis built a comfortable lead against the New Orleans starters. But the Hornets bench players used a much more aggressive style on both ends of the floor to threaten the Grizzlies' lead.

New Orleans has lost three straight and nine of its last 10.

Comments
Topics mentioned in this article
NBA Rudy Gay Marina Erakovic
Get the latest updates on IPL 2020, check out the IPL Schedule for 2020 and Indian Premier League (IPL) Cricket live score . Like us on Facebook or follow us on Twitter for more sports updates. You can also download the NDTV Cricket app for Android or iOS.