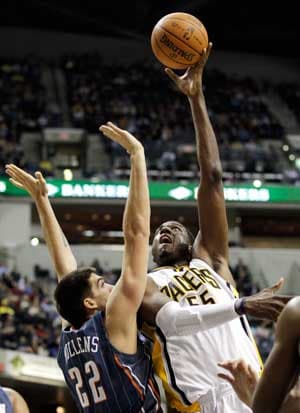 Hibbert, who briefly left the game with a sprained right ankle, also had eight rebounds and three blocks. Tyler Hansbrough scored 15 points, Darren Collison had 14, and Danny Granger and George Hill each added 13 for the Pacers (6-2), who improved to 3-0 at home. Indiana was coming off an 87-74 win at Boston on Friday night.

D.J. Augustin scored 20 points, Gerald Henderson had 14 points and 10 rebounds, and Byron Mullens added 10 points and 11 rebounds for the Bobcats (2-6).

Indiana shot 51 percent and held the Bobcats to 33-percent shooting - the fifth time the Pacers have held an opponent under 40 percent.

Comments
Topics mentioned in this article
NBA Roy Hibbert
Get the latest updates on Olympics 2020, Olympics 2020 Medal Tally, Live Cricket Score . Like us on Facebook or follow us on Twitter for more sports updates. You can also download the NDTV Cricket app for Android or iOS.