Derrick Rose scored 29 points and the Chicago Bulls stayed on a roll by cooling off the streaking San Antonio Spurs 96-89 on Wednesday. 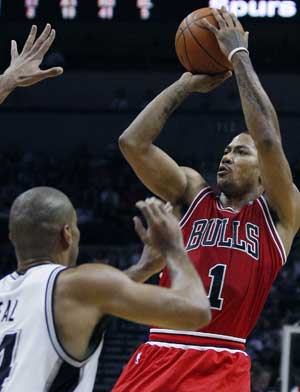 Derrick Rose scored 29 points and the Chicago Bulls stayed on a roll by cooling off the streaking San Antonio Spurs 96-89 on Wednesday.

Rose shook off a scary-looking collision with Tony Parker early that kept the reigning MVP on the floor clutching his right knee for several minutes. But he never left the game and the Bulls became just the second team to win in San Antonio this season.

Gary Neal led the Spurs with 21 points. San Antonio floundered late and had its homecoming spoiled after going 8-1 during the winningest nine-game road trip in NBA history.

The Bulls have won 11 of 13 and nudged a half-game past Miami for first place in the Eastern Conference.

Tim Duncan had 18 points and 10 rebounds. He brought the Spurs back from an 11-point deficit in the third quarter after starting out rusty following the longest midseason break of his career. The 35-year-old wasn't at All-Star weekend for the first time but relished the rest in the compressed, lockout-shortened schedule.

Duncan scored 12 in the third while Parker , who was an All-Star, struggled to keep pace with Rose. Parker finished with 11 points on 5-of-16 shooting, had nine assists and stumbled through his lowest-scoring game in a month.

In fact, Parker's most memorable play may have been the one that nearly appeared to take out Rose. The point guards banged knees late in the first quarter in a collision that left Parker standing but Rose writhing on his back.

Bulls trainers rushed to his side and kneeled over him for several minutes before Rose finally stood up and walked to the bench. He spent the ensuing timeout pacing the sideline, shaking out his knee, then immediately proved he was OK by darting toward the basket and finishing a tough layup on the very next possession.

After scoring 32 points and sinking a crucial jumper with 19.4 seconds left to beat lowly New Orleans on Tuesday night, Rose delivered late again. He scored 13 in the second half and hit a 9-foot bank shot with 1:46 left that put Chicago up 87-82.

Duncan quickly answered, but on the next possession Rose all but finished off the Spurs. This time it was a tough 18-footer over Duncan's outstretched hand that put the Bulls up 89-84, and Luol Deng's 3-pointer with 39.6 seconds left stretched the lead to six and sealed a winning start to Chicago's three-game road swing.

San Antonio has been practically invincible at home. But the Spurs, now 13-2 at the AT&T Center, aren't going anywhere soon: They'll play their next six at home as amends for spending the last month on their most successful Rodeo Road Trip ever.

Danny Green added 11 points for the Spurs. C.J. Watson scored 12 off the bench for Chicago, and Deng finished with 10.

Richard Hamilton started again for the Bulls after returning from a month long absence on Tuesday against the Hornets. Hamilton has been bothered by a sore thigh and played just 15 minutes, scoring two points on 1-of-8 shooting.

Comments
Topics mentioned in this article
Joakim Noah NBA Lionel Messi
Get the latest Cricket news, check out the India cricket schedule, Cricket live score . Like us on Facebook or follow us on Twitter for more sports updates. You can also download the NDTV Cricket app for Android or iOS.