Kevin Durant scored 27 points and the Thunder beat the Spurs 108-103 in Game 5, moving within a victory of a series knockout and the conference title after beating San Antonio for the third time in five days. 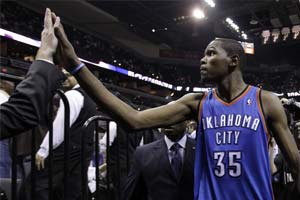 Kevin Durant scored 27 points and the Thunder beat the Spurs 108-103 in Game 5, moving within a victory of a series knockout and the conference title after beating San Antonio for the third time in five days.

"We came here, we wanted to get a win on their home floor," Durant said. "That's what it took for us to advance or to get to where we wanted to go."

Russell Westbrook added 23 and the Thunder took a 3-2 lead in a wildly entertaining series. Looking invincible while carrying a 20-game winning streak a week ago - the fourth-longest in NBA history - the Spurs have lost three straight and are on the verge of a stunning collapse.

Manu Ginobili scored 34 in a smashing return to the starting lineup, and the switch showed just how much Spurs coach Gregg Popovich knew his team might be in trouble. The only way the Spurs would have considered the move a success is if they had they won, and that chance went clanging off the back of the rim with 4.9 seconds left when Ginobili missed an off-balance 3.

Ginobili then walked to the scorer's table, made a fist and hammered it down.

It was the Spurs' first loss at home since April 11.

Popovich said he removed Danny Green from the starting lineup and plugged in Ginobili - who had started only seven previous times this season - to give the Spurs "an energy boost." But that didn't solve a third straight uneven game for the Spurs, particularly another languid second quarter that put them in a 14-point hole.

"If we don't get that straight," Popovich said, "it'll be over on Wednesday."

Oklahoma City, meanwhile, is bringing home just what it needed: the must-win on the road.

"That was a total team effort," Thunder coach Scott Brooks said. "Everybody did their job. I thought we played as hard as we can play."

Oklahoma City pulled it off behind their stars. James Harden scored 20, joining Durant and Westbrook as the only Thunder players in double figures.

Harden hit the biggest shot, draining a 3-pointer with 28.8 seconds left that pushed Oklahoma City's lead to five. He admitted afterward that the ball was supposed to go to Durant but had no choice but to let go with the shot clock winding down and Spurs rookie Kawhi Leonard in his face.

"The shot clock was running down and I had to make a play," Harden said. "Leonard was playing great defense on me. I just shot it with confidence. West Conference finals - that's a big shot."

Tony Parker had 20 points and Tim Duncan had 18 points and 12 rebounds for the Spurs.

After remaining unbeaten for 50 days before arriving in Oklahoma City, San Antonio has lost three games in five days. They now must win two straight to avoid seeing their last best chance to win in a title in the Duncan era end.

"Championship teams win on the road," Popovich said. "Oklahoma City just did that."

It's the first time the Spurs have lost three in a row all season.

Durant scored 22 of his points in the second half. He dedicated the win to his uncle, whom Durant said was in the hospital.

Not wanting the series to slip away, Popovich moved Ginobili to the starting lineup in place of Green, who came in shooting a combined 8 of 28 in this series.

Green's days as a starter began looking numbered after Game 3. He couldn't save his job before leaving Oklahoma City - Green shot 4 of 12 in both losses combined - and Popovich couldn't wait any longer with the series tied and the season in the balance.

Out with the undrafted swingman who barely made training camp, and in with the former All-Star. Pulling this big an adjustment this deep in the season likely didn't come easy for the NBA coach of the year, and the gambit drew mixed results.

It looked like a no-brainer with Ginobili leading all scorers at halftime with 14, but new rotations for the Spurs made for rocky possessions. None more so than in the second quarter, when the Spurs shot 38 percent.

Ginobili finished 11 of 21 and made half of his 10 3-point attempts. But with the game and arguably San Antonio's season on the line, his last one didn't connect.

"It's either win or go home," Ginobili said. "It's our job. Nobody is going to feel sorry about ourselves."

Comments
Topics mentioned in this article
Kevin Durant NBA Russell Westbrook
Get the latest updates on IPL 2021, check out the IPL 2021 Schedule and Indian Premier League Live Score . Like us on Facebook or follow us on Twitter for more sports updates. You can also download the NDTV Cricket app for Android or iOS.