Tim Duncan had 26 points and 10 rebounds following an eight-day layoff for the top-seeded Spurs, who wore down Los Angeles in the Clippers' sixth game in 11 days and won Game 1 of their Western Conference semifinals series, 108-92 on Tuesday. 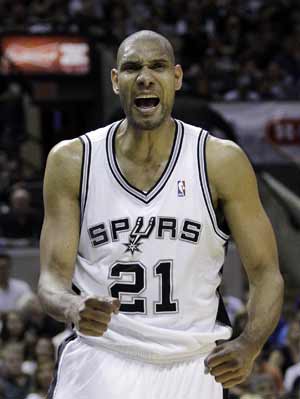 Tim Duncan had 26 points and 10 rebounds following an eight-day layoff for the top-seeded Spurs, who wore down Los Angeles in the Clippers' sixth game in 11 days and won Game 1 of their Western Conference semifinals series, 108-92 on Tuesday.

"It's hard to tell if they were tired or not. If we were rusty or not," Spurs guard Manu Ginobili said. "The game just developed that way it did."

By that, he meant the latest Spurs blowout.

The Spurs have won 15 in a row, haven't lost in more than a month and are winning by an average margin of nearly 17 points during that span. It's the longest winning streak sustained in the NBA playoffs since the 2004 Spurs carried 17 straight wins into the second round that season.

That Spurs team, however, wound up dropping four straight to the Lakers and lost that series. The Clippers have a lot of work to do if they're going to stage a similar stunner, and a good start would be getting healthy.

Blake Griffin scored 15 points in 28 minutes a day after estimating his sprained left knee had him feeling "80 percent" at best. The All-Star said he became tired quicker than usual, and also turned his left ankle early in the game.

"But I'll get back in the training room, get treatment and hope to be better the next game," Griffin said.

The marquee matchup of the series, All-Star point guards Tony Parker and Chris Paul, began with a fizzle.

Paul, who ended the first round with an aching hip, scored just six points and didn't make a single basket in the second half. Parker was barely any batter, putting together seven points and 11 assists, and didn't talk to reporters after the game.

Paul did face the media after his worst playoff game since scoring four points in a loss to Denver in 2009. But not until after a quick chat with his young son.

Paul, who was 3 of 13 from the floor, gave a more elaborate explanation to reporters.

"I felt I got all the shots that I wanted. I just didn't make them," Paul said. "That's the most frustrating part. Getting to where I wanted to and not seeing them go down. Can't do that in the playoffs."

That gives the beat-up and banged-up Clippers one full day of rest, which is all the time they've had to recover between games for the past week and a half. Los Angeles couldn't even fly home first after knocking out the Grizzlies on Sunday in Game 7 of a grueling series that had the Clippers hobbling next to Texas.

Rookie Kawhi Leonard added 16 points, hitting all three of his 3s, and Danny Green added 15 points for the Spurs.

Caron Butler scored 15 points and Nick Young had 13 for the Clippers. Los Angeles cut the deficit to single digits with a 10-burst in the fourth quarter before San Antonio ran away with its 11th double-digit victory during this dominating winning streak.

The Clippers didn't even need San Antonio's help getting more bumps and bruises: Mo Williams, already playing with his sore right fingers taped, took a lump on the head when teammate Reggie Evans kicked him with an errant foot after Williams fell on his back in the lane.

Williams wobbled when he tried standing, sat back down, and the Clippers burned a timeout. He never left the game, but the Clippers weren't getting any fresher.

Parker, meanwhile, finally felt the hard knocks and slow-him-down shoves that Utah repeatedly promised but never delivered in the first round. Sometimes, the All-Star looked in vain to officials when the whistle didn't blow. When that didn't work once in the first quarter, he kept jabbering about a no-call on the last possession while lining up to shoot free throws on the current one.

Parker waved off the NBA Coach of the Year, he was under control. But his frustrations didn't end there. He was 1 for 9 despite playing 38 minutes, scoring all but two of his points at the foul line.