DeMar DeRozan scored 13 of his 22 points in the third quarter and made four pivotal free throws down the stretch as the short-handed Toronto Raptors held off the Boston Celtics 84-79 on Friday. 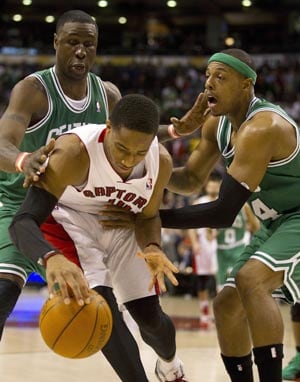 DeMar DeRozan scored 13 of his 22 points in the third quarter and made four pivotal free throws down the stretch as the short-handed Toronto Raptors held off the Boston Celtics 84-79 on Friday.

"I just try to be aggressive," DeRozan said. "A couple plays I saw an opportunity to get to the basket and I did. I should have made it and had an and-one ... but that's what it's all about. Getting to the line and knocking down your free throws."

DeRozan was a perfect 13-for-13 from the line as the Raptors ended a four-game losing skid despite being without two of their top players. Big man Andrea Bargnani was shut down for the rest of 2011-12 with an aggravation of a lingering left calf injury that had forced him to miss nearly half the season, while point guard Jose Calderon was still feeling the effects of a right eye bruise and was kept out as a precaution.

"They did an excellent job of coming in offensively and defensively and taking it to a team that has been one of the hottest since the all-star break," Raptors coach Dwane Casey said. "I didn't sleep at all last night just worrying about getting the ball across half court."

Paul Pierce's 18 points led the Celtics (34-25), who nearly wiped out a 15-point fourth-quarter deficit but ultimately fell shot in the opener of a stretch when they play six games in six different cities over an eight-day span.

Boston remained three games ahead of Philadelphia atop the Atlantic Division after the 76ers dropped a 95-89 decision to the New Jersey Nets.

Kevin Garnett had 13 points and 10 rebounds for the Celtics, while Rajon Rondo dished out 12 assists, giving him 20 straight games with double-digit assists.

"They have been playing some decent basketball and have always been known as a hard working team," Garnett said. "They shared the ball and were aggressive. We couldn't hit shots or get any stops. Tough game."

The Celtics used relentless full-court pressure and timely shot-making to erase Toronto's double-digit edge, pulling to within one on a three-point play by Pierce with 38.8 seconds remaining. DeRozan drew a foul on Toronto's next possession and made both free throws to put Toronto ahead 78-75, but Pierce answered with a one-handed slam to trim the deficit with 20.5 seconds left.

"I just thought the way we set the tone to begin the third quarter just changed the game," Celtics coach Doc Rivers said. "I told our guys you can never activate a team and I thought we did that. They haven't won a lot of games and once they felt like they had a chance to win, they made great shots and made great plays."

Two more free throws by DeRozan extended the lead, and Pierce missed badly on a game-tying 3-point attempt. Linas Kleiza knocked down four free throws in the waning moments to put the game away, giving Toronto a split of the four-game season series.

Kleiza added 17 points in a reserve role for Toronto, which finished with a 50-37 rebounding edge.

"I don't know if it's fatigue from going through a rough schedule, end of the week ... you know it's crazy because we have three games in a row," Pierce said. "We should have come out with better urgency in the third quarter.

"Right now we have a lot to play for, we are playing for playoff positioning and that has to be the mindset regardless of who steps on the court. So with the possibility of moving up to the three or four seed these are must-win games for us."

Comments
Topics mentioned in this article
NBA Rajon Rondo Toronto Raptors Kevin Garnett
Get the latest Cricket news, check out the India cricket schedule, Cricket live score . Like us on Facebook or follow us on Twitter for more sports updates. You can also download the NDTV Cricket app for Android or iOS.