Kevin Garnett had 24 points and 11 rebounds and Rajon Rondo scored 21 points with 10 assists to lead the Boston Celtics to a 101-91 victory over the Heat in Game 3 of the NBA Eastern Conference finals on Friday, cutting Miami's lead in the series to 2-1. 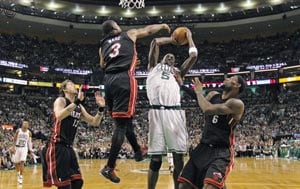 Kevin Garnett had 24 points and 11 rebounds and Rajon Rondo scored 21 points with 10 assists to lead the Boston Celtics to a 101-91 victory over the Heat in Game 3 of the NBA Eastern Conference finals on Friday, cutting Miami's lead in the series to 2-1.

Paul Pierce scored 23 points for Boston. Game 4 is on Sunday in Boston.

LeBron James scored 34 points, but the NBA Most Valuable Player and the rest of the Heat went cold during a 7-minute stretch at the end of the first quarter and the beginning of the second, when Boston outscored them 15-0 to turn a six-point deficit into a nine-point lead.

James scored 16 points in the first quarter but had just four points with one rebound and one assist in the fourth, when Miami cut a 24-point deficit to eight. Mike Miller hit consecutive 3-pointers during an 11-0 run that cut the deficit to 95-87.

Miami still trailed by eight points, with the ball, when Dwyane Wade missed and Ray Allen grabbed the rebound, sending Rondo on a fast break that made it a 99-89 with 99 seconds to play. James threw the ball away underneath, then missed a 3-point attempt the next time down - one of only four shots he took in the fourth quarter.

Pierce found Garnett for a long jump shot at the other end, and the teams began emptying their benches.

Coming off his 44-point effort in the Game 2 loss in Miami, in which he played every second of regulation and overtime, Rondo was 9 for 16 from the field and grabbed six rebounds. Marquis Daniels led the Boston bench with nine points and five rebounds in 18 minutes.

Wade scored 18 points and Mario Chalmers had 14 points and six assists for Miami. Shane Battier was scoreless, missing all six shots, and Ronny Turiaf had three points while tangling with Garnett under the basket for much of the game.

The Celtics center, who has appeared rejuvenated during these playoffs at the age of 36, got called for another technical foul for a violent elbow but otherwise seemed to be enjoying himself. While waiting to inbound the ball in the second quarter, he high-fived a young child sitting courtside in a No. 5 Celtics jersey.

At the other end, after falling to the court after his shot, he did a series of push-ups to the crowd's amusement.

Comments
Topics mentioned in this article
NBA Rajon Rondo Kevin Garnett
Get the latest Cricket news, check out the India cricket schedule, Cricket live score . Like us on Facebook or follow us on Twitter for more sports updates. You can also download the NDTV Cricket app for Android or iOS.