Porltand's rookie guard Damian Lillard had a career-high 29 points as the Trail Blazers handed the San Antonio Spurs a surprise second-straight loss with a 98-90 victory on Thursday. 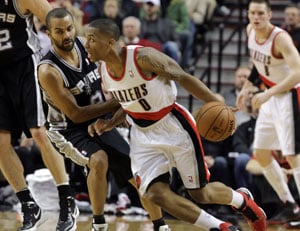 Porltand's rookie guard Damian Lillard had a career-high 29 points as the Trail Blazers handed the San Antonio Spurs a surprise second-straight loss with a 98-90 victory on Thursday.

Like the Spurs, another pre-season title fancy, the Los Angeles Lakers also remained in a rut, losing to the New York Knicks, while Atlanta crept up the standings with a comfortable home win over Charlotte.

The Spurs, who have dropped only six games this season but were coming off a loss to Utah on Wednesday, trailed by as many as 12 in the second half but cut the deficit to 89-85. J.J. Hickson answered for the Blazers with a running hook that made it 91-85 with 2:36 left.

Danny Green hit a 3-pointer to pull the Spurs closer again, but Portland clung to the lead and Nicolas Batum - who has been bothered by a sore back - made a 3 that gave Portland a 96-90 advantage with 1:08 left. Batum hit two free throws with 8 seconds to go for the final margin.

It was Lillard's 13th game this season with 20 or more points. LaMarcus Aldridge added 22 points for the Blazers.

Tony Parker had 21 points for the Spurs.

New York's Carmelo Anthony scored a remarkable 22 points in the first quarter and even though he was later lost to an ankle sprain, the Knicks recorded a 116-107 win over the struggling Lakers.

Firing in 3-pointers and moving the ball to open shooters, things they often struggled to do under former coach and now Lakers coach Mike D'Antoni, the Knicks won for the eighth time in nine games and improved to 9-0 at home for the first time since the 1992-93 season.

Meanwhile, things are starting as poorly for D'Antoni in Los Angeles as they ended in New York. The Lakers, still without Steve Nash and Pau Gasol, were never really in the game while losing their fourth straight and falling to 9-14.

Atlanta has quietly snuck up the standings, and moved level with Miami for the Southeast Division lead by beating the Charlotte Bobcats 113-90

Devin Harris scored 20 points and Josh Smith added 18 for Atlanta, which has won five of six.

Gerald Henderson had 17 points for the Bobcats, who have lost 10 straight.