The Los Angeles Clippers' NBA losing skid reached a worrying four games with a 101-100 defeat at the hands of the Portland Trail Blazers on Saturday. 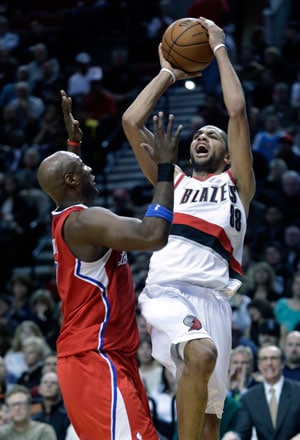 The Los Angeles Clippers' NBA losing skid reached a worrying four games with a 101-100 defeat at the hands of the Portland Trail Blazers on Saturday.

The Clippers have gone from 32-9 to 32-13 - with the past three losses coming in the absence of injured guard Chris Paul - and while they still lead the Pacific Division, they now trail league-leading Oklahoma City by 2-1/2 games.

In other key games, second-placed San Antonio made it eight straight wins by downing Phoenix, Houston extended its hoodoo over Brooklyn by beating the Nets for the 12th straight time, Utah edged Indiana in overtime, and Milwaukee downed Golden State.

Portland's Nicolas Batum had 20 points, 10 rebounds and a career-high 12 assists for his second triple-double in a week, as the Trail Blazers won a see-sawing contest.

Having been up by 14 points, Portland ceded the lead to Los Angeles in the fourth quarter, but reclaimed the advantage with 45 seconds to go when J.J. Hickson sank two foul shots. Jamal Crawford missed a 19-foot jumper for the Clippers with 0.9 seconds left.

The San Antonio Spurs extended their home winning streak to 16 games by beating the Phoenix Suns 108-99, with Tony Parker having 31 points and Manu Ginobili 20.

The Spurs were without Tim Duncan (sore knee) and coach Gregg Popovich (illness) for a third consecutive game but outscored Phoenix 27-17 in the fourth.

Michael Beasley had 25 points for the Suns, who lost for the first time since coach Lindsey Hunter took over.

The Houston Rockets performed strongly off the boards and in the key to beat the Brooklyn Nets 119-106.

James Harden scored 29 points and Chandler Parsons added 16 points and a career-high 11 assists for the Rockets, who outrebounded the Nets 50-31 and outscored Brooklyn 60-24 in the paint.

Nets star Deron Williams scored 27 points, but cooled off after a 20-point first quarter. He was ejected with 1:07 left after arguing a call.

Al Jefferson scored 25 points and Paul Millsap had 21 for Utah, which scored the first six points in the extra session after blowing a 97-89 lead with 2:44 left in regulation.

Paul George scored 24 points for Indiana, who lost despite winning the rebounds 41-28.

Milwaukee's Brandon Jennings scored 20 points to help the Bucks to a 109-102 win over the Golden State Warriors.

Milwaukee's Monta Ellis also had 20 points against his former team.

Stephen Curry's 26 points led Golden State, which has lost its past four in Milwaukee.

The Philadelphia 76ers cruised to a 97-80 home win over the New York Knicks, with Jrue Holliday scoring a career-best 35 points and Nick Young adding 20.

The Sixers led from the start and beat the Knicks for the first time in four tries.

New York's Carmelo Anthony needed 28 shots to get 25 points. He has 28 straight 20-point games, tied with Patrick Ewing for second-longest streak in franchise history. Richie Guerin did it 29 games in a row in 1961-62.

The Denver Nuggets built a 32-point lead after three quarters and then rested its starters as they cruised to a 121-93 win over the Sacramento Kings.

Ty Lawson scored 26 points and Andre Iguodala had 20 for the Nuggets, who shot 62 percent in the first two quarters to reach 71 points at halftime.

Aaron Brooks scored 16 points for the Kings, who have lost four straight.

The Washington Wizards beat the Chicago Bulls 86-73 to bring up five-straight home wins for the first time in five years.

In other games, Cleveland's Kyrie Irving made a 3-pointer with 0.7 seconds left to give the Cavaliers a 99-98 win at the Toronto Raptors and Charlotte's Gerald Henderson left it almost as late, sinking a 3 with 4.6 seconds left as the Bobcats beat the Minnesota Timberwolves.