A 16-year-old boy is in custody and suspected of opening fire after an NBA game on Monday, injuring eight people who had gathered outside an arena to watch the Oklahoma City Thunder play the Los Angeles Lakers, police said on Wednesday. 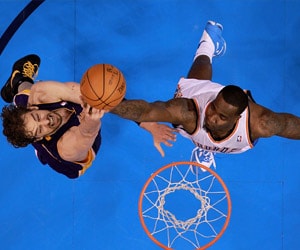 A 16-year-old boy is in custody and suspected of opening fire after an NBA game on Monday, injuring eight people who had gathered outside an arena to watch the Oklahoma City Thunder play the Los Angeles Lakers, police said on Wednesday.

The police said they expect to file charges against the youth of shooting with intent to kill the eight victims, after filing an affidavit in court on Wednesday detailing the evidence against the boy.

The Daily Oklahoman newspaper reported on Wednesday that the boy confessed to the shooting, but that could not immediately be confirmed.

He was among a group of young people who had clashed repeatedly with another group during the "viewing party" outside Chesapeake Arena, according to Billy Bock, attorney for a 19-year-old man who went to the downtown gathering with the 16-year-old suspect and other friends.

The sparring groups eventually were separated by police before someone suddenly drew a gun and began firing, said Bock.

A smart-phone video broadcast on a local television station records 14 shots being fired. Police have asked the public to hand over any other video of the shootings.

Three of the people shot were bystanders, while five had been involved in the group clashes, which revolved around "high school, girls-and-boys stuff," Bock said.

"It was the kind of stuff we used to settle with fist fights, but now these kids have guns," Bock said.

Bock's client, Rodney Hill, had been detained in the case but was ordered released by a judge on Wednesday.

An estimated 7,000 to 9,000 people had gathered outside Chesapeake Arena on Monday night when the shootings occurred.

After defeating the Lakers, the Thunder will meet the San Antonio Spurs on Sunday in the next round of the NBA playoffs. The team said on Wednesday that it will no longer allow fans to view the game on a giant screen on the street outside the arena. Viewing there will be restricted to before the game.