Tayshaun Prince made a driving left-handed shot with 24.3 seconds remaining, and the Detroit Pistons held on to beat the Atlanta Hawks 86-85 on Friday. 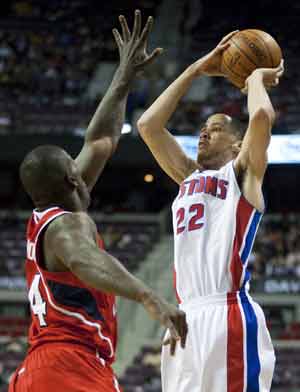 Tayshaun Prince made a driving left-handed shot with 24.3 seconds remaining, and the Detroit Pistons held on to beat the Atlanta Hawks 86-85 on Friday.

Detroit wasted a 12-point fourth-quarter lead and trailed by one after Jeff Teague's layup with 36.6 seconds to play, but Prince answered and Atlanta's Joe Johnson missed a contested shot from the left corner in the final seconds.

Josh Smith came up with the rebound for the Hawks and sank a fadeaway that was immediately waived off for coming after the buzzer. The call was upheld after a video review.

Greg Monroe scored 20 points and Jason Maxiell added 19 for Detroit. Smith led the Hawks with 21 and Johnson scored 18 in his first game back after missing four with left knee tendinitis.

Comments
Topics mentioned in this article
NBA Detroit Pistons Josh Smith Atlanta Hawks
Get the latest Cricket news, check out the India cricket schedule, Cricket live score . Like us on Facebook or follow us on Twitter for more sports updates. You can also download the NDTV Cricket app for Android or iOS.