Paul Pierce had 18 points and 11 rebounds, and Avery Bradley scored 22 points to lead the Boston Celtics to a 109-101 win over the Philadelphia 76ers on Wednesday. 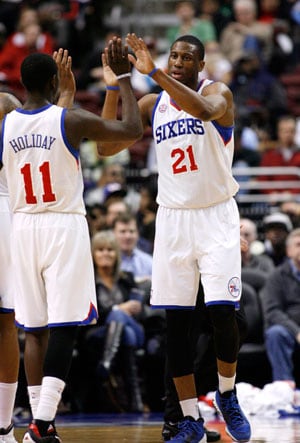 Paul Pierce had 18 points and 11 rebounds, and Avery Bradley scored 22 points to lead the Boston Celtics to a 109-101 win over the Philadelphia 76ers on Wednesday.

Led by Pierce, the Celtics controlled the game and used a 9-0 run midway through the fourth quarter to seal the win. Last May, these two teams went to Game 7 of the Eastern Conference semifinals. On Wednesday, the Sixers lost for the ninth time in 10 games and are well out of the playoff race.

Oklahoma City's Russell Westbrook had 37 points and 10 rebounds, and Kevin Durant scored 26 as the Thunder held off a second-half charge to down the Los Angeles Lakers 122-105.

The Thunder led from start to finish, but had their 18-point lead whittled down to five midway through the fourth quarter.

Kobe Bryant ended up with 30 points after leaving the game with a right elbow injury in the first quarter. Steve Nash matched his season best with 20 points as the Lakers fell back below .500 after reaching the mark for the first time since December.

At Sacramento, California, Ty Lawson had 24 points and Danilo Gallinari added 23 as the Denver Nuggets won their sixth straight game 120-113 over the Sacramento Kings.

The deep and talented Nuggets used a 36-point third quarter to build a lead against the Kings that they never relinquished in winning their season-best third straight road game. They scored 70 second-half points when they shot nearly 64 percent.

The streaking Nuggets have won seven of eight games, including 11 in a row at home, where they own a 26-3 record, which ties Miami for the best mark in the NBA.

Kenneth Faried had 19 points and 12 rebounds, Andre Miller scored 16 and Kosta Koufos had 15 points and eight rebounds for Denver.

Comments
Topics mentioned in this article
NBA Houston Rockets Boston Celtics Ray Allen Paul Pierce Philadelphia 76ers
Get the latest updates on IPL 2021, IPL Points Table , IPL Schedule 2021 , live score . Like us on Facebook or follow us on Twitter for more sports updates. You can also download the NDTV Cricket app for Android or iOS.