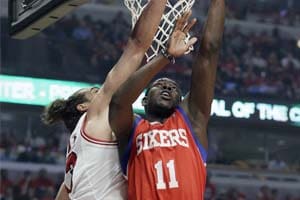 The superstar point guard received a standing ovation and waved to the crowd as he limped onto the court to present the game ball, then watched from a suite as the 76ers simply blitzed the Bulls in the third quarter.

They outscored Chicago 36-14 in the period, turning an eight-point deficit into an 83-69 lead, and pulled even with the league's top-seeded team. Game 3 is Friday in Philadelphia.
,
Holiday was 11 of 15 from the field, and the Sixers shot 59 percent overall. Williams came up big, going 8 of 13 after hitting just 1 of 6 shots in the opener, and Chicago product Evan Turner chipped in with 19 points, seven rebounds and six assists.

Turner scored 11 points in the period, and Philadelphia wiped out a 55-47 deficit.

The Sixers were leading 68-61 midway through the quarter after a 12-0 run that Elton Brand started with a foul-line jumper. Then, after a basket by C.J. Watson, Andre Iguodala threw down a thunderous one-handed dunk over Deng for a three-point play that drew plenty of oohs, aahs and groans from a crowd that felt this one slipping away.

Things didn't get much better for Chicago after that.

The 76ers continued to pour it on, with Iguodala throwing down another vicious dunk late in the quarter and then hitting Williams with an alley-oop pass that made it 83-69 heading into the fourth.

It was rough for the Bulls, who insist they have enough to make a championship run even though they lost Rose to a torn ACL in his left knee near the end of Game 1.

After all, they know how to win without him.

Rose missed 27 games during the regular season because of a variety of injuries, and the Bulls did just fine, going 18-9. Throw in injuries to Richard Hamilton and Deng, and they were able to go with their projected starting five just 15 times, yet they still captured homecourt advantage throughout the playoffs for the second straight season.

Comments
Topics mentioned in this article
Lionel Messi Philadelphia 76ers NBA
Get the latest Cricket news, check out the India cricket schedule, Cricket live score . Like us on Facebook or follow us on Twitter for more sports updates. You can also download the NDTV Cricket app for Android or iOS.