Lou Williams scored 25 points, and Elton Brand had 14 points and 14 rebounds to lead the Philadelphia 76ers to a 105-83 victory over the Golden State Warriors on Friday in the 50th anniversary of Wilt Chamberlain's 100-point game. 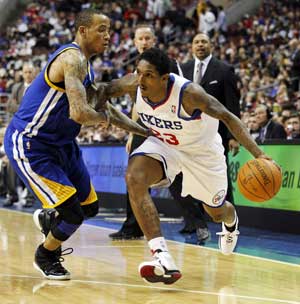 Lou Williams scored 25 points, and Elton Brand had 14 points and 14 rebounds to lead the Philadelphia 76ers to a 105-83 victory over the Golden State Warriors on Friday in the 50th anniversary of Wilt Chamberlain's 100-point game.

The Sixers topped 100 points for the first time in 20 games on the night they paid tribute to the record Chamberlain set for the Philadelphia Warriors against the New York Knicks on March 2, 1962, at the Hershey Sports Arena.

The Sixers gave fans pieces of the court and honoured Chamberlain's sisters and former teammates during a halftime ceremony.

Andre Iguodala had 12 points and 11 rebounds for the Sixers. Thaddeus Young scored 16 points.

Chamberlain's feat was recognized with interview clips, audio from the record-breaking fourth quarter, and a mounted 2"x2" piece of hardwood from the game court the Sixers recently purchased from the owners in Hershey, Pennsylvania. They donated part of the court to the Naismith Memorial Basketball Hall of Fame.

When the Sixers made their 37th basket on Friday in the fourth quarter, it gave them 92 points.

The Sixers made their push to match Chamberlain in the fourth when Jrue Holiday and Williams hit 3s midway through the quarter to build an 85-67 lead. Nearly 18,500 fans were rocking, helping the Sixers - and the atmosphere - match their early-season fast start when they won 12 of 14 at home.

The Sixers had dropped five of six home games.

Brand had his second straight double-double after missing a pair of games with a strained right thumb. With center Spencer Hawes out with a strained Achilles', Brand realized he needed to become a more reliable scoring option down low. He had eight points and eight rebounds in the third quarters as the Sixers stretched the lead to double digits.

With only their second win in eight games in hand, the crowd turned their attention down the stretch to the 100-point mark. In Hershey, Chamberlain's point total was announced to the fans after each bucket late in the game. Fans on this night chanted "100 for Wilt!"

Young's jumper bounced high off the rim and through to make it 99-79. Iguodala swished an 18-footer with 1:22 left for 101 points and the crowd erupted as if the shot were a playoff winner.

Of course, 100 points also meant free McDonald's for everyone in the crowd.

Fifty years ago, the crowd went wild for The Big Dipper. In 2012, it's Big Macs.

The point total was about the lone moment of suspense in a game the Sixers controlled for the final 24 minutes.

Comments
Topics mentioned in this article
NBA Philadelphia 76ers
Get the latest Cricket news, check out the India cricket schedule, Cricket live score . Like us on Facebook or follow us on Twitter for more sports updates. You can also download the NDTV Cricket app for Android or iOS.