The Philadelphia 76ers held on in a nervous finish to edge the Dallas Mavericks 100-98 on Tuesday and move within one game of the lead in the NBA's Atlantic Division. 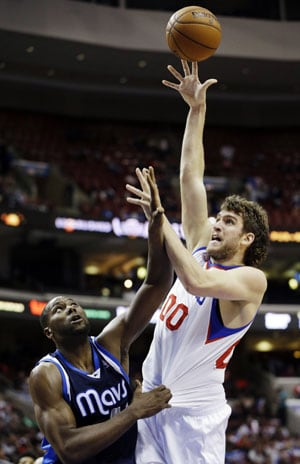 The Philadelphia 76ers held on in a nervous finish to edge the Dallas Mavericks 100-98 on Tuesday and move within one game of the lead in the NBA's Atlantic Division.

The Sixers finally created some space in a back-and-forth game when they broke a tie with a 10-0 run midway through the fourth, only for the Mavericks to fight their way back.

Dallas' Vince Carter hit his third 3-pointer and then a left-handed layup to cut the gap to two points with 37 seconds left. O.J. Mayo missed two crucial free throws with 2.7 seconds to go and Jae Crowder's last-gasp jump shot was off the mark.

Evan Turner scored 22 points and Thaddeus Young had 20 for Philadelphia, which had lost six in a row against Dallas.

It was a similarly close finish in Los Angeles, where the hometown Lakers lost 79-77 to the Indiana Pacers.

George Hill's high-arching shot with a tenth of a second left went over Dwight Howard and through the hoop to give the Pacers a surprising third straight win at the Lakers.

Hill scored 19 points and hit that enormous clutch shot for Indiana, which stifled L.A.'s up-tempo offense and turned the game into a defensive grind.

Kobe Bryant hit a tying 3-pointer with 24.5 seconds left and produced the 114th 40-point game of his career for the Lakers, who dropped to 2-3 under new coach Mike D'Antoni.

The Houston Rockets had a more comfortable finish, downing the Toronto Raptors 117-101, with James Harden scoring 24 points and matching a career high with 12 assists.

Houston, which has four straight wins, planned to fly to Minneapolis immediately after the game to attend Wednesday's funeral for Sasha McHale - daughter of coach Kevin McHale - and then directly to Oklahoma to play on Wednesday night.

Andrea Bargnani scored 21 points for the Raptors, who have lost five straight.

The Minnesota Timberwolves snapped a run of five-straight losses by beating the Sacramento Kings 97-89, with Kevin Love recording 23 points and an NBA season-high 24 rebounds.

Love, who missed the first nine games of the season with a broken right hand, was a force inside all night for the Timberwolves, who took the lead late in the first quarter and never trailed again.

Tyreke Evans and DeMarcus Cousins each scored 20 points for the Kings, who snuck within two points with just under three minutes left but could not draw level.

The Phoenix Suns produced a big finish to the third quarter to set up a 91-78 win over the hapless Cleveland Cavaliers.

Goran Dragic scored 19 points and Michael Beasley added 15 for the Suns, who scored the final 14 points in the third.

Cavaliers center Anderson Varejao had 20 points and 18 rebounds for his sixth straight double-double but could not prevent Cleveland suffering a tenth loss in 11 games.

Comments
Topics mentioned in this article
NBA Charlotte Bobcats Chicago Bulls Atlanta Hawks Philadelphia 76ers
Get the latest Cricket news, check out the India cricket schedule, Cricket live score . Like us on Facebook or follow us on Twitter for more sports updates. You can also download the NDTV Cricket app for Android or iOS.