Evan Turner made the go-ahead layup with 40.4 seconds left and Philadelphia held off Boston the rest of the way with six straight free throws as the 76ers evened the second-round Eastern Conference series with an 82-81 victory on Monday. 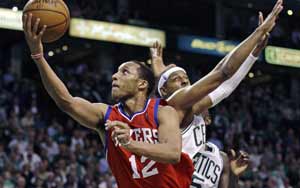 Evan Turner made the go-ahead layup with 40.4 seconds left and Philadelphia held off Boston the rest of the way with six straight free throws as the 76ers evened the second-round Eastern Conference series with an 82-81 victory on Monday.

Turner finished with 10 points, including his layup that put the Sixers up 76-75. He added two free throws with 12 seconds to go.

Jrue Holiday scored 18 points and Andre Iguodala added 13 points, seven assists and six rebounds for the Sixers, who blew a 10-point lead in the fourth quarter as the Celtics won Game 1.

Kevin Garnett had 15 points and 12 rebounds and Ray Allen scored 17 points for the Celtics.

Game 3 is on Wednesday in Philadelphia.

Philadelphia won its first playoff game in Boston since 1982 despite committing a playoff-high 19 turnovers and getting outrebounded 47-36.

Spencer Hawes finished with eight points and 10 rebounds and Lavoy Allen scored 10 points for the Sixers.

Brandon Bass had 12 points for the Celtics, who couldn't quite repeat their comeback in the series opener. The Sixers led by 10 points early in the fourth quarter of Game 1 before the Celtics rallied for a 92-91 victory.

It was starting to look familiar for Philadelphia on Monday, but the Sixers were able to hold off the Celtics down the stretch in a tight finish.

Philadelphia led 57-49 entering the fourth, but Boston tied it twice before going up 72-71 on Avery Bradley's 3-pointer, setting off a series of shots from beyond the arc.

Holiday answered with a 3 for the Sixers, then Ray Allen got the lead right back for the Celtics on a 3-pointer with 1:40 left. The Celtics had a chance to extend the lead after forcing the Sixers into a 24-second shot clock violation, but Rondo missed a shot and Iguodala got the rebound, leading to Turner's layup to put the Sixers up 76-75 with 40.4 seconds to go.

Rondo and Allen both missed shots that would have put Boston ahead, then Rondo fouled Turner with 14.4 seconds left as the shot clock was winding down.

The Celtics fouled Turner again with 12 seconds and he hit both free throws to extend the lead to 78-76.

Fans grew restless as the second half opened with sloppy, choppy play by both teams. Boston led 38-36 at halftime and nearly 7 minutes into the third quarter the score was just 43-41 with the Celtics still ahead.

When the shots finally started falling, they were all for Philadelphia. The Sixers scored 14 straight points, turning a 47-43 deficit into a 57-47 lead in the final minute of the period. Boston went without a point for 4:40, finally scoring when Pierce made two free throws with 2.4 seconds left in the period.

The Celtics committed seven turnovers during the quarter and made just 4 of 17 shots.

Comments
Topics mentioned in this article
NBA Philadelphia 76ers Kevin Garnett Andre Iguodala Detroit Pistons Ray Allen
Get the latest updates on Olympics 2020, Olympics 2020 Medal Tally, Live Cricket Score . Like us on Facebook or follow us on Twitter for more sports updates. You can also download the NDTV Cricket app for Android or iOS.