Omer Asik placed his hands on his hips in disbelief as an improbable 76ers' celebration erupted around him. 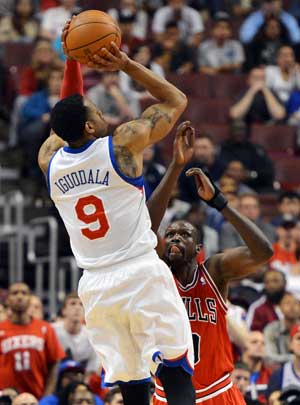 Omer Asik placed his hands on his hips in disbelief as an improbable 76ers' celebration erupted around him.

Derrick Rose was lost for the series in Game 1. Joakim Noah hit the bench for good in Game 4.

Now all the Chicago Bulls are headed home after a tough tumble from the top of the East to postseason punch line.

Andre Iguodala made the go-ahead free throws with 2.2 seconds left and Philadelphia rallied for a 79-78 victory over the top-seeded Chicago Bulls in Game 6 on Thursday night, advancing to the second round of the Eastern Conference playoffs for the first time since 2003.

"I really thought we'd take it back to Chicago," forward Taj Gibson said.

Instead, the Sixers will move on and face Boston, which beat Atlanta in six games, in the conference semifinals.

Asik missed two free throws with 7 seconds left that would have given the Bulls a three-point lead. Iguodala grabbed the second miss, sprinted the length of the court, and was fouled by Asik on the driving layup.

The Sixers put their season in the hands of one of the worst fourth-quarter free-throw shooters in the NBA.

Coach Doug Collins was hunched over with his hands clasped while Iguodala was at the line.

Iguodala made nine of 10 free throws in the fourth quarter in this series after shooting 45 percent (23 of 51) from the line in the period this season.

Iguodala changed his approach at the line this series. He started thinking what it would be like to teach his son how to shoot free throws.

"I was like, 'Son, this is how you shoot free throws,'" Iguodala said.

Asik stood motionless on the free-throw line when the stunning upset was completed. Philadelphia cheerleaders stormed the court and danced around him before he trudged off the court.

The Sixers are the fifth No. 8 seed to win a first-round series against a No. 1 seed. Memphis eliminated San Antonio last season, while Golden State (2007), New York (1999) and Denver (1994) also pulled off the rare feat.

In his second season, Collins had already led the Sixers to their first winning season in seven years. Now, they are on to the second round for the first time since Allen Iverson was an All-Star.

Iguodala hopped on the scorer's table and played to the crowd as the catchy 76ers' anthem blared in the arena.

His teammates joined Iguodala and danced along as confetti fluttered around them.

"Number one, Philadelphia. Here they come, team of the year."

Team of the first round, for sure.

"I don't know how we won this game," Collins said.

The Sixers were smiling and mobbed each other as they dashed to the locker room to keep the party going.

The Sixers were 2.2 seconds from playing Game 7 in Chicago.

Now, they will pack their bags for the second round. They went 2-1 against the Celtics this season.

Collins had a catch in his voice at the postgame podium and was joined by his 4-year-old grandson, Cooper. Collins held back tears while talking about faith, family and his guys in the locker room.

Collins and the Sixers hardly cared the series win comes with an asterisk.

The Bulls lost Rose to a torn anterior cruciate ligament in his left knee late in their Game 1 win. Noah missed the last three games with a sprained left ankle.

Without their stars, the Bulls found it tough to gut one out against the Sixers.

Iguodala scored 20 points, and Jrue Holiday and Lou Williams each scored 14 for the Sixers, who were outrebounded 56-33.

Iguodala snagged the one that mattered.

"We win on a rebound. Something we don't get all night," a smiling Collins said.

The Sixers started 20-9 and led the Atlantic Division for the first half of the season until a late fade sent them tumbling toward eighth place.

None of that matters now.

Not even the fact the Bulls were down two stars.

The 50-win Bulls are heading home early a year after they reached the conference finals.

"We were on the ropes and we battled," forward Carlos Boozer said. "In the end, it came down to the very last second. So, it's tough. We were right there, given everything, right there. It will be a long summer."

The Sixers tried to get a laugh by showing the Bulls bench on "Kiss Cam." Noah popped his warm-up jacket toward the camera and the crowd booed the oversized "Chicago" on the big screen.

Noah was one of the top offensive rebounders in the league and the Bulls figured on missing his presence in the middle. Led by Deng and Boozer, the Bulls instead went out and controlled the boards, holding a 49-29 edge early in the fourth.

"This one hurts," Noah said. "We battled. We believed. But in the end, it wasn't enough. I will think about this one all summer."