Sasha Pavlovic scored 12 of his of his season-high 16 points in the fourth quarter, leading a group of Boston Celtics reserves in a 78-66 win over the Miami Heat on Tuesday as both teams rested their top players. 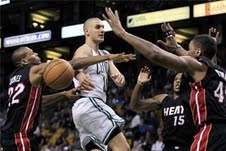 Sasha Pavlovic scored 12 of his of his season-high 16 points in the fourth quarter, leading a group of Boston Celtics reserves in a 78-66 win over the Miami Heat on Tuesday as both teams rested their top players.

LeBron James, Dwyane Wade and Chris Bosh were out for the Heat. Ray Allen, Kevin Garnett and Rajon Rondo didn't play for the Celtics. The teams had much more to lose in potential injuries than they could gain with another victory in the second-to-last game of the regular season.

The result was a season-low point total for the Heat, who scored the first 11 points of the game but couldn't stop Pavlovic down the stretch. With Miami's loss, the Chicago Bulls clinched the No. 1 seed in the Eastern Conference.

Dexter Pittman had 12 points, James Jones scored 11 and Udonis Haslem grabbed 13 rebounds for the Heat, whose 25 turnovers were a season high. Miami failed to score 20 in any quarter and had just 16 in each of the final two periods.

Marquis Daniels finished with 13 points, Brandon Bass had eight points and eight rebounds for the Celtics. Boston's Paul Pierce finished with eight points. He started the game, but sat out the fourth quarter while Pavlovic thrilled the remaining fans as the Celtics improved to 3-1 against the Heat this season.

Anyone who bought a ticket to this game months ago, anticipating an Eastern Conference showdown was disappointed. Instead of a rematch of last year's second-round playoff series, it was the Heat JV taking on the Celtics Lite.

Bosh didn't dress again because of a left hamstring strain. James and Wade were still in warmups and didn't come to the bench until after the starting lineups were announced.

Allen was out already with bone spurs, Rondo has a sore back an Garnett's hip flexor has been bothering him.

The Celtics had almost as many turnovers (7) as points (10) in the first quarter and failed to score until a little past the midpoint of the opening period. But after the sloppy start, Boston's patchwork lineup came together in the third quarter, tying it with a 10-0 run late and then outscoring the Heat 10-4 to start the fourth.

Williams hit two free throws to put Boston up 58-54, then Pavlovic pulled up with a baseline jumper for a 60-54 lead with 6:35 remaining and Miami called a time out.

Pavlovic continued to pick apart the Heat, driving for a dunk that put the Celtics up 62-56, then hitting a 3-pointer to stretch the lead to nine with 4:45 left.

Pavlovic's previous high for the season was 10, two fewer than he scored in the final quarter.

Pierce hit a jumper, fed Bass with a pass under the basket for a dunk and then Pavlovic hit a jumper to get the Celtics started on a 10-0 run that tied it at 46-all late in the third quarter. It was tied at 50 entering the fourth. Daniels stole the ball from Juwan Howard and took it uncontested for a dunk that put the Celtics up 54-52, Boston's first lead since 18-17 in the second quarter.

Haslem and Mario Chalmers were the only regular Miami starters while Pierce and Bass were Boston normal starters in the opening lineup.

Comments
Topics mentioned in this article
Udonis Haslem NBA
Get the latest Cricket news, check out the India cricket schedule, Cricket live score . Like us on Facebook or follow us on Twitter for more sports updates. You can also download the NDTV Cricket app for Android or iOS.