Paul Pierce battled through another tough game to score 36 points and the Boston Celtics wiped out Atlanta's 11-point lead in the second half even without Rajon Rondo, stunning the Hawks 87-80 on Tuesday in Game 2 of the Eastern Conference playoffs. 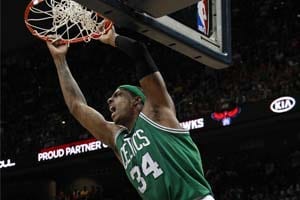 Paul Pierce battled through another tough game to score 36 points and the Boston Celtics wiped out Atlanta's 11-point lead in the second half even without Rajon Rondo, stunning the Hawks 87-80 on Tuesday in Game 2 of the Eastern Conference playoffs.

The series is tied 1-1. Game 3 is on Friday in Boston, and Rondo will be back for the Celtics in that one, his shorthanded team having claimed the home-court edge. The stellar point guard sat out a one-game suspension for bumping an official in the opener.

The Hawks appeared to be in control when they pushed out to a 65-54 lead late in the third quarter. But Boston sliced it to 66-61 by the end of the period, and Pierce led a dominating fourth.

The Celtics were up 74-72 when a quick spurt essentially finished the Hawks, especially when Josh Smith went out late in the game with a sprained left knee.

Joe Johnson turned it over, part of another tough game for the Hawks star, sparking a fast break that ended with a give-and-go from Avery Bradley to Pierce for a dunk. After Jeff Teague missed badly on a jumper, Pierce came down and hit his first 3-pointer of the series after missing his 10, stretching the lead to 79-72 with 31/2 minutes left.

The Hawks called a timeout, but no need.

This one was over.

Atlanta's last hurrah ended when Johnson missed a free throw with a chance to close the gap to two points with 1:35 remaining. Kevin Garnett was hacked at the other end and made both his foul shots, Johnson missed a wild 3 from the top of the key and chants of "Let's go Celtics!" erupted at Philips Arena while the red-clad fans headed for the exits.

Pierce scored Boston's first nine points but struggled mightily through the second and third quarters. He finished 12 of 26 and came through when the Celtics needed him, especially with the offense a bit out of sync without its floor leader - heck, he even dropped to his knee and Tebowed after a free throw that locked it up with just a minute to go.

For good measure, Pierce also led his team in rebounding with 14. Garnett had 15 points and 12 rebounds, while Bradley, who shifted over to take Rondo's spot at the point, chipped in with 14 points but only three assists, a far cry from what the Celtics usually get out of that position.

Johnson had 22 points but never got many open looks, hitting just 7 of 17 from the field. Smith had 16 points and 12 rebounds, the state of his knee now becoming a major concern for the Hawks, who already have played most of the season without Al Horford.

Early on, Teague was a force at both ends for the Hawks. He made a great crossover move out beyond the 3-point stripe, split the Celtics defense and went right down the lane for a massive slam. Defensively, he showed off his speed when he got caught on the wrong side trying to double-team the ball, sprinting all the way to the other corner to swat a 3-point attempt by Keyon Dooling into the crowd.

Teague thumped his chest defiantly and was patted on the back by a fan wearing a vintage Hawks jersey. He finished with 18 points but wasn't much of a factor down the stretch.

The game definitely appeared to be going the Hawks' way by the third quarter. When Smith tried to pass the ball inside, Boston's Greg Stiemsma got a hand on it, but the ball deflected into the corner, right to a wide-open Johnson, standing behind the 3-point arc. With no one around, he swished the 3 to push the Hawks to a 65-54 lead.

From that point, Pierce outscored the Hawks all by himself, 18-15, including 13 points in the final quarter.

For the longest time, the Celtics struggled to do anything right. They botched a 3-on-1 when Mickael Pietrus tried an ill-advised bounce pass, which was about the only way Atlanta's Kirk Hinrich had any chance of stopping the break. He knocked it away, the Hawks took off the other way, and Smith laid in an easy one.

Boston coach Doc Rivers stormed out of his seat, livid at his team's sloppiness, and signaled for a timeout. He was so mad he didn't even want to stand near his players as they trudged to the bench, remaining out near the foul line until he regained his composure.

He was feeling a lot better by the end. The Hawks made just 4 of 19 shots in the final quarter, missing all four of their 3-point attempts. They also turned it over five times.

How Ravichandran Ashwin Was 'Kidnapped' As Teenager, Threatened To Have Fingers Chopped
Advertisement