By the time Avery Bradley, who is recovering from a dislocated shoulder, sank a free throw to give the Boston Celtics a 37-point lead early in the third quarter, Paul Pierce was done for the night, riding a stationary bicycle under the stands and trying to keep his sore left knee from stiffening up. 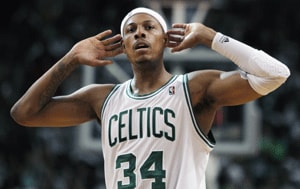 By the time Avery Bradley, who is recovering from a dislocated shoulder, sank a free throw to give the Boston Celtics a 37-point lead early in the third quarter, Paul Pierce was done for the night, riding a stationary bicycle under the stands and trying to keep his sore left knee from stiffening up.

Ray Allen went to the bench soon after to rest his ailing right ankle. He grabbed a seat near Kevin Garnett, who is about to turn 36 and played 42 minutes in the previous game, surpassing 50,000 total minutes in the regular season and playoffs in his 17-year NBA career.

"We had a lot of things going on on our bench today with bodies," coach Doc Rivers said on Sunday after the Celtics coasted to a 101-79 victory over the Atlanta Hawks to take a 3-1 lead in their best-of-seven playoff series. "The whole game I kept looking down there (to see if) there were enough guys to put in the game."

Pierce scored 24 points in 18 minutes before heading to the stationary bicycle in the tunnel leading to the locker room, getting some much-needed rest after the Celtics scored 16 of the first 18 points in the second half.

Boston can close out the Hawks with a victory in Game 5 on Tuesday in Atlanta. Game 6 would be in Boston on Thursday, if necessary.

"Their team set the tone from the jump ball and we weren't able to recover," said Al Horford, who played for the first time in almost four months and scored 12 points. "It's disappointing for us to lose this way, but the good thing is we're going back home. It's 3-1 and I'm sure a lot of people are writing us off already. But we feel pretty good about going back home."

Horford returned from a torn pectoral muscle that has kept him out since Jan. 11, but he wasn't available in the fourth quarter. Josh Smith returned after missing Friday's game and had 15 points and 13 rebounds for Atlanta. Tracy McGrady, a key contributor in the first half of Game 3 before turning his ankle, played just nine minutes and scored two points.

"We were beaten in every phase of the game," Hawks coach Larry Drew said. "We just didn't respond very well. I haven't seen that type of performance in our team in quite some time."

Two nights after Rajon Rondo had a triple-double to help turn back the Hawks in overtime, he may have been even better, scoring 20 points with 16 assists. The point guard shot 8 for 11 from the floor, sinking a pair of 3-pointers to tie a career high.

Perhaps the biggest boost of all for the aging and injured Boston lineup: Rondo and Brandon Bass were the only Celtics to play more than 30 minutes.

"That time on the bench was good time," said Allen, who missed more than three weeks with bone spurs before returning for 37 minutes in Game 3. "It was good we played the way we did early. We've got to manage our bodies."

Pierce limped off the court favoring his left knee midway through the second quarter, but he returned for the start of the third. He was on the court as Boston went on a 16-2 run to start the second half and open an 80-37 lead with 8:13 left in the third quarter.

That was enough to earn Pierce, who played 47 minutes on Friday and tweaked his knee during Sunday's shootaround, some much-needed rest. Bradley, who dislocated his shoulder in Game 3, played just 19 minutes Sunday and Allen sat down after scoring 12 points and pulling down five rebounds in 19 minutes in Game 4.

"We overplayed them the last game, gave them the day off and they came out with this effort," Rivers said. "I think over the long run ... if you can get two or three of these games, it has to help."

The teams went to the locker rooms at the half with Boston holding a 63-41 lead. But during the break, the officials reviewed a jumper by Allen and changed it from a 2-pointer to a 3-pointer. Rondo hit a 3-pointer to open the third quarter, giving Boston a 26-point lead, then Bass made a jumper and Pierce hit a 3 to make it 72-41.

By the time the Hawks recovered, Boston led 80-43 and Rivers was emptying his bench. Pierce tried to keep his legs moving in case he was needed again.

Now he's hoping for a long break if the Celtics can eliminate the Hawks in five games.

"The NBA is a weird league, and one game could give a team confidence," said Pierce, who tripped over a teammate's foot in the shootaround and aggravated the injury when he came off a screen in the game. "We hope that we can take them and advance in the series in the next game."

The Hawks weren't able to get any closer than 22 points before Rondo and Allen hit back-to-back 3-pointers, then Rondo made a behind-the-back fake to clear out the lane for an easy layup as Boston closed out the third quarter with a 90-63 lead.

Atlanta did cut it to 20 points in garbage time before Keyon Dooling made a 3-pointer with just under 2 minutes to play.

Comments
Topics mentioned in this article
NBA Atlanta Hawks Avery Bradley Paul Pierce Ray Allen Boston Celtics Houston Rockets
Get the latest Cricket news, check out the India cricket schedule, Cricket live score . Like us on Facebook or follow us on Twitter for more sports updates. You can also download the NDTV Cricket app for Android or iOS.