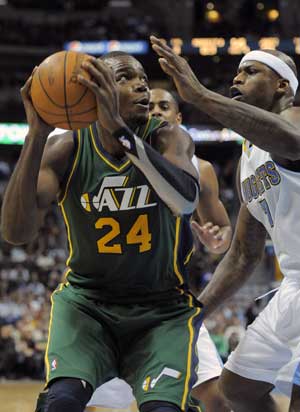 Gordon Hayward scored 19 points and Devin Harris and Alec Burks added 10 each for the Jazz, winners of seven of their last eight.

Danilo Gallinari scored 18 points, Nene had 17 and Arron Afflalo 16 for the Nuggets.

The game was close throughout until Millsap got going early in the fourth quarter. He scored 16 points in the period and gave the Jazz control of a close game.

After a 3-pointer by Gallinari cut the lead to 81-79, the Jazz went to Millsap down low. The forward responded by scoring Utah's next 14 to give the Jazz a 95-83 lead midway through the period.