Indiana Pacers held Miami to a season-low point total in an 87-77 win over the Heat on Tuesday. 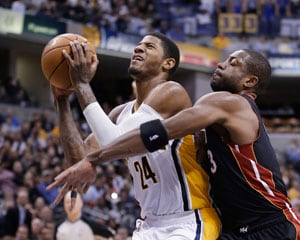 Indiana Pacers held Miami to a season-low point total in an 87-77 win over the Heat on Tuesday.

Dwyane Wade scored 30 points and James had 22 points and 10 rebounds for Miami (23-10), which still has the best record in the Eastern Conference.

It was the first time the teams had met since Miami beat the Pacers in six games in the conference semifinals last year.

Milwaukee's Brandon Jennings scored 29 points as the Bucks gave Jim Boylan a win in his first game as coach with a 109-99 victory over the Phoenix Suns.

The Bucks parted ways with coach Scott Skiles on Monday in what was called a mutual decision, and the Bucks appointed Skiles' top assistant Boylan as a replacement. This is the second time Boylan has succeeded Skiles midseason. He took over the Bulls when Skiles was fired on Christmas Eve in 2007.

James Harden scored 31 points and Chandler Parsons added 20 to help set up the win after Houston trailed by as many as 14 in the first half.

Metta World Peace had a season-high 24 points for the Lakers, who were playing without their top three big men: Dwight Howard, Pau Gasol and Jordan Hill - all out with injuries. Kobe Bryant added 20 for the Lakers and Steve Nash had 16 as they tied a season high with their fourth straight loss.

The Brooklyn Nets improved to 6-1 under interim coach P.J. Carlesimo with a 109-89 win over the Philadelphia 76ers.

Andray Blatche scored 20 points for the Nets, hours after he was questioned by Philadelphia police as part of a sexual assault investigation at an upscale hotel. Blatche was not charged.

Jrue Holiday scored 19 points and Spencer Hawes had 14 for the Sixers.

At Minneapolis, Nikola Pekovic had 25 points and a career-high 18 rebounds, and Andrei Kirilenko added 21 points to lead the Minnesota Timberwolves over the Atlanta Hawks 108-103.

Derrick Williams scored 17 points and Alexey Shved had 15 for the Timberwolves, who were missing coach Rick Adelman due to personal reasons. Terry Porter filled in and led the Wolves to their first victory over Atlanta since 2006, snapping an 11-game skid in the series.