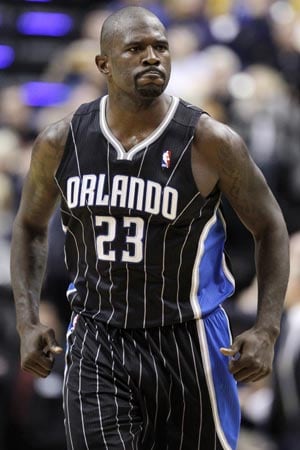 Howard, the Magic's leading scorer and the league's top rebounder, will miss the rest of the season after having back surgery. The Magic played defense Howard would have been proud of down the stretch, overcoming a seven-point deficit by holding the Pacers scoreless for the final 4:05.

"We're all we got," said Davis, who had 16 points and 13 rebounds. "We're not trying to impress the doubters or make them believe. Only if we believe. When we believe, there's unlimited things that we can do. We've been through a lot mentally, physically. We've overcame and did a great job out there today."

Orlando coach Stan Van Gundy was fine with the chatter about his team's chances. Before the game, he joked that the best prediction he had heard was the Magic losing in five games. He quickly followed that by saying opinions don't matter.

His team backed him up.

Orlando took a 68-67 lead on a dunk by Earl Clark with 9:41 remaining, but the Pacers held the Magic scoreless for nearly five minutes to take a 75-68 lead.

A 3-pointer by Richardson cut Indiana's lead to 77-75. The Pacers missed 3-pointers on three consecutive possessions, and Danny Granger missed two free throws with 1:14 left. Richardson made another 3-pointer to give the Magic a 78-77 lead with 1:04 to play.

"With Dwight being out, the 3-point line is what we had to take care of, and we didn't," Pacers guard Paul George said.

Granger missed in close, and Orlando snagged the rebound. Nelson was fouled and made two free throws with 24.5 seconds left to give the Magic an 80-77 lead.

Darren Collison missed a shot from near the free throw line, and Orlando rebounded. Clark missed two free throws with 12.1 seconds remaining, giving Indiana one more chance. Indiana barely got the ball inbounds, then Granger traveled with 7.5 seconds remaining. J.J. Redick's free throw at the other end finished the scoring.

"This team is full of talented players who can play hard," Orlando forward Ryan Anderson said. "That's a great mix and we have each other's backs. Everybody says that, you know, the underdog thing and stuff. We don't believe it. We don't look into that at all. We know how we can play and we know how good we are."

"In one game, you give up what you played all season for," West said. "We talked about how good this team was, how dangerous they were in shooting the ball. They got us."

Indiana coach Frank Vogel expected Orlando's offensive style, which focuses on spacing the floor and shooting 3-pointers, to present a challenge. Orlando led the league in 3-pointers made and attempted during the regular season and was third in percentage (.375).

Orlando fell behind by 10 in the first quarter before rallying in the second. A 3-pointer by Richardson gave Orlando a 43-40 lead, and the Magic increased that lead to 49-42 on a bucket by Nelson. The Magic led 51-44 at halftime, taking the air out of a crowd that showed up with high expectations. The Pacers made numerous atypical mistakes; among them, shooting just 9 for 15 from the free throw line.

Indiana opened the second half on an 8-2 run that included a 3-pointer and a fadeaway by Granger. George Hill was fouled on a 3-pointer, and he made all three free throws to finally give Indiana a 58-57 edge and bring the crowd back into the game.

Anderson's 3-pointer in the final minute of the quarter, his first of the game, gave the Magic a 64-63 lead at the end of period. Indiana held Orlando to 13 points on 6-for-19 shooting in the period, but couldn't support its good defense with offensive production in the fourth. Indiana shot 30 percent in the final 12 minutes and 35 percent overall.

"We definitely let this one get away," George said. "We went through a stretch of a lot of in and out shots."

Game 2 will be Monday night in Indianapolis.

Indiana doesn't plan to fall behind 2-0.

"We need to be sharper on reads offensively and execute in crunch time," Vogel said. "I have every bit of confidence we will bounce back."