Kevin Durant stood above the 3-point line and watched the shot clock dwindle in the final seconds of Game 4. When Metta World Peace backed up slightly on defense, Durant hesitated only an instant before launching a 26-footer. 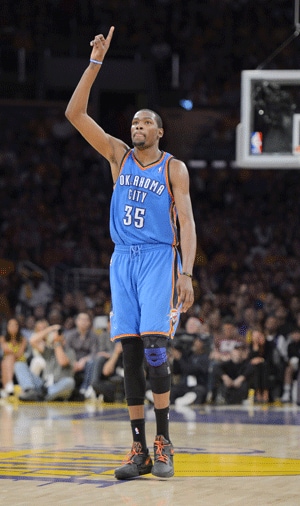 Kevin Durant stood above the 3-point line and watched the shot clock dwindle in the final seconds of Game 4. When Metta World Peace backed up slightly on defense, Durant hesitated only an instant before launching a 26-footer.

The three-time scoring champ trusts his instincts and his silky-smooth jumper. Neither let him down while he and Russell Westbrook engineered yet another late comeback that pushed a frustrated Kobe Bryant to the brink.

Westbrook scored 10 of his 37 points during a stirring fourth-quarter rally, Durant added 31 points and hit that tiebreaking 3-pointer with 13.7 seconds left, and the Thunder seized control of their second-round series with a 103-100 victory over the Los Angeles Lakers on Saturday.

Serge Ibaka scored 14 points and the second-seeded Thunder took a 3-1 series lead with a rally from a 13-point deficit in the final 8 minutes, moving one win away from their second straight trip to the Western Conference finals.

"Everybody kept fighting," Westbrook said. "We all believed in each other. It's the playoffs. You can't afford to sit back and wonder about it."

Oklahoma City improved to 7-1 in the postseason with a tenacious rally on the second night of back-to-back games against the Lakers and Bryant, who scored 38 points but struggled in the fourth quarter of Los Angeles' fifth loss in seven games. After Durant put the Thunder ahead with his shot-clock-draining 3-pointer, Kobe couldn't match it with 10 seconds left.

With a surge that seemed inevitable to the Lakers' worried crowd, Durant and Westbrook led the Thunder back with teamwork throughout a 32-point fourth quarter. Bryant was left lamenting the help he didn't get - particularly from four-time All-Star Pau Gasol, who made the unforced turnover that led to Durant's decisive 3.

"Pau has got to be more aggressive," Bryant said of Gasol, who managed just 10 points and five rebounds while committing three turnovers. "He's got to be aggressive, got to shoot the ball, drive to the basket, and he will next game. ... (The turnover was) just a bad read on Pau's part. It happens."

The Thunder finished Game 4 on a 22-8 run, punctuated by Durant's dramatic 3-pointer and two late free throws from James Harden, who had 12 points. After sweeping Dallas in the first round, the Thunder are one win away from sending home the NBA's last two champions, and in perhaps the greatest measure of the Thunder's growth over the two years since the Lakers ushered them out of the first round on the way to their second straight title, nobody seems surprised.

"We know no game is over," Durant said. "We've witnessed that before. We play hard every possession and live with the results, and we came out on top."

Andrew Bynum had 18 points and nine rebounds for the Lakers, who led 92-81 with 7:45 to play before Westbrook went to work with a furious series of drives to the hoop. The UCLA product scored nine points in just over 2 minutes, and Kendrick Perkins capped the 17-4 run on a putback layup with 1:16 left, putting Oklahoma City up 98-96 with its first lead since the first quarter.

After Bryant evened it with two free throws, Westbrook and Pau Gasol then traded turnovers, with Durant swiping Gasol's careless pass before burying a straightaway 3-pointer that silenced Staples Center. The Thunder made 10 of their 15 shots in the final period.

"I wish I could sit up here and say how that happened," Oklahoma City coach Scott Brooks said. "It just happened."

World Peace had 14 points in the second game of the Lakers' first back-to-back playoff games in 13 years. A night after the Lakers got back in the series with a late comeback for a 99-96 victory in Game 3, Los Angeles led for most of the game, but couldn't execute on offense late, struggling for even difficult shots.

"We can talk about us offensively, because we had some struggles," Lakers coach Mike Brown said. "But it comes down to those guys scoring 32 points in the fourth quarter, and I thought they did that very easily. That's the most disappointing thing."

The game was the third Nba playoff contest in 27 hours at Staples Center, which will host six playoff games in hockey and basketball over a four-day stretch this weekend. With the Los Angeles Kings' ice just below the Lakers' court, several players appeared to slip and slide on the floor during the game, and Westbrook nearly did the splits at the halftime buzzer when his right foot slipped.

"I was a little stiff, but we needed this win," Westbrook said.

Oklahoma City appeared to be unhappy with the floor's condition, but Staples Center did nothing different in its changeover, and the referees deemed the floor safe for play. The San Antonio Spurs, on course to meet the Thunder in the conference finals, didn't appear worried about the floor during their win over the Clippers.

"We're all upset and extremely frustrated, (but) I don't think anybody is worried about going into Oklahoma City and getting a win," Bryant said. "We don't think about winning three in a row."

After Oklahoma City defended its home court with a blowout win in the opener and a comeback from a seven-point deficit in the final 2 minutes of Game 2, the Lakers finally answered Friday night with their own late rally. Los Angeles took control of Game 4 early on while the Thunder struggled with their shots and their footing.

Westbrook slipped near midcourt at the halftime buzzer, his right foot sliding forward when he attempted to stop. He stayed down on the court for an uncomfortably long moment before walking gingerly to the locker room with his hand on his left hip, but got treatment at halftime and returned for the third quarter.

The game was Chapter 4 in the four-day extravaganza at Staples Center. The Kings play Game 4 of the Western Conference finals against Phoenix on Sunday afternoon, followed by the Clippers' fourth game against San Antonio, all while tens of thousands of fans gather outside to watch the Tour of California, the nation's largest cycling race, which finishes on the street outside shortly before the Kings' opening faceoff.

Comments
Topics mentioned in this article
NBA Kevin Durant Russell Westbrook
Get the latest updates on IPL 2021, check out the IPL 2021 Schedule and Indian Premier League Live Score . Like us on Facebook or follow us on Twitter for more sports updates. You can also download the NDTV Cricket app for Android or iOS.