Oklahoma City's Kevin Durant put in a strong fourth-quarter performance to guide the Thunder to a 97-91 victory at the Chicago Bulls on Thursday. 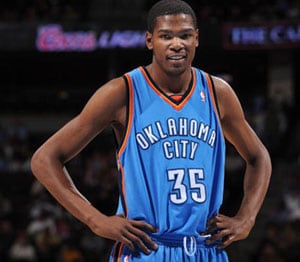 Oklahoma City's Kevin Durant put in a strong fourth-quarter performance to guide the Thunder to a 97-91 victory at the Chicago Bulls on Thursday.

Durant scored 10 of his 24 points in the fourth quarter, sealing the win with an off-balance jumper off one foot with 35.1 seconds to play.

Serge Ibaka scored 15 of his 21 points in the first half, and had a team-high nine rebounds for the Thunder, who beat the Bulls for the third time in their last four games at Chicago.

Luol Deng led the Bulls with 27 points, and Richard Hamilton had 20 points and eight rebounds.

De'Andre Jordan and Chris Paul had 21 points apiece for the Clippers, who led by 25 in the first half before the hosts mounted a second-half challenge.

Nicolas Batum had 23 points and nine rebounds for the Blazers, including a 3-pointer which cut the deficit to six points late in the third quarter.

Clippers star Blake Griffin had 10 rebounds and seven points while playing with a sleeve covering his right arm for the third straight game because of fluid in his elbow.

Comments
Topics mentioned in this article
NBA Los Angeles Clippers Kevin Durant
Get the latest updates on IPL 2021, IPL Points Table , IPL Schedule 2021 , live score . Like us on Facebook or follow us on Twitter for more sports updates. You can also download the NDTV Cricket app for Android or iOS.