The NBA-leading Oklahoma City Thunder overcame the absence of a couple of regular starters and won a tight contest 87-83 at Portland on Sunday, ending the Trail Blazers' nine-game home winning streak. 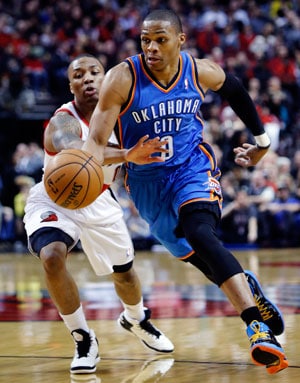 The NBA-leading Oklahoma City Thunder overcame the absence of a couple of regular starters and won a tight contest 87-83 at Portland on Sunday, ending the Trail Blazers' nine-game home winning streak.

Oklahoma City's Kevin Durant had 33 points and Russell Westbrook added 18 points and nine assists for the Thunder, who played without starters Serge Ibaka and Thabo Sefolosha because of injuries.

LaMarcus Aldridge had 33 points and 11 rebounds for the Blazers, who trailed by 11 points but got within one point with 21.9 seconds to go.

Kendrick Perkins missed the first of two free throws and after a timeout Aldridge missed a tough fade-away jumper from about 20 feet out. Westbrook made a pair of foul shots for the final margin.

The Denver Nuggets came from eight points down at the start of the fourth quarter and beat the Golden State Warriors 116-105.

Danilo Gallinari scored 21 points and Ty Lawson had 20 for the Nuggets, who opened the final quarter with a 19-2 run to turn the game around.

Tony Parker scored 20 points while Gary Neal was 3 for 3 on 3-pointers in scoring 15 points for San Antonio, who lost coach Gregg Popovich to an ejection in the fourth quarter but responded with an 11-0 run.

Deron Williams had 22 points and nine assists and Joe Johnson scored 20 points for the Nets, who were down 67-55 late in the third quarter but swung the game their way with a 26-8 run to start the fourth.

David West had 27 points to lead the Pacers.

The New York Knicks ended a three-game losing skid by beating the New Orleans Hornets 100-87. Carmelo Anthony snapped out of a slow start by scoring 18 of his 27 points in the second quarter.

The Milwaukee Bucks made it eight straight wins over Toronto by beating the Raptors 107-96, with Brandon Jennings having 19 points and 10 assists.

The Los Angeles Lakers ended a dire run of six consecutive defeats by overcoming the Cleveland Cavaliers 113-93. Dwight Howard had 22 points and 14 rebounds in his return from a three-game injury absence.