Russell Westbrook and Kevin Durant started slowly. Once the NBA's highest scoring duo got going, they ran right through the Los Angeles Lakers. 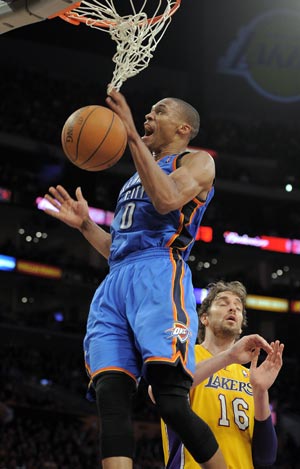 Russell Westbrook and Kevin Durant started slowly. Once the NBA's highest scoring duo got going, they ran right through the Los Angeles Lakers.

Westbrook scored 36 points, Durant added 21 and the West-leading Oklahoma City Thunder won 102-93 on Thursday for their fifth consecutive victory in the match-up of division leaders.

Westbrook was 2 of 6 in the opening quarter.

"The game got out of whack. It was my job to pick it up," he said. "We did a great job of defending and closing out the game."

Durant started out 1 of 9, describing it as "probably the worst I've played since I've been here but I kept fighting.

"They were all good shots. My team-mates carried me and I started to make some shots."

The Thunder shot 46 percent, ending their streak of hitting 50 percent or better in their four previous games. They outscored the Lakers on second-chance points, had a 25-8 edge in fast-break points and grabbed 19 offensive rebounds.

"We did a pretty good job in the half court, but the offensive rebounds that gave them second opportunities and transition baskets killed us," Kobe Bryant said. "Every time we give up that many offensive rebounds, we lose pretty much every game."

Andrew Bynum had 25 points and 13 rebounds and Bryant added 23 points on 7-of-25 shooting for the Lakers, who have lost their last two at home and are 0-2 against the Thunder this season, including a 15-point road loss last month.

"The thing about Kobe is that he makes tough shots, and he didn't make them like he usually does," Thunder coach Scott Brooks said. "Thabo (Sefolosha) did a good job forcing him away from his sweet spots and making him take tough shots."

Bryant viewed the game as a measuring stick against the West leaders, who are 39-12. The Lakers are third at 31-20.

"We were in that position a few years back. We had to struggle, fight, scratch and claw with teams in those positions, and we got to the playoffs and won a championship," he said. "Last year against Dallas, I think we beat them every time during the regular season. So it's all about how teams continue to improve during the course of the regular season."

Oklahoma City pulled away to open the fourth quarter with a 10-0 run that stretched its lead to 88-70 while Westbrook kept Bryant tied up offensively. Westbrook and Durant scored four points each in the spurt that had Laker fans booing.

The Lakers responded with a 14-4 run to close to 96-89, with Metta World Peace hitting two 3-pointers and Bryant not scoring. Westbrook and Durant missed shots, but they regrouped in time to score their team's final 10 points.

"Russell Westbrook established the tempo in the third quarter and he changed the pace of the game for them," Bryant said. "He's one of my favourites. He's developed his outside shot a great deal, and he went to the post a little bit as well so he's a problem."

Durant was limited to a lone 3-pointer while Westbrook scored at will, alternately slashing to the basket or hitting from the perimeter. His 3 beat the buzzer to end the quarter. Kendrick Perkins had 10 of his 12 points in the third.

"In the third quarter, he just came out, put his head down and went 1-on-4 and either scored or got fouled every time he came down the floor," Lakers coach Mike Brown said. "To give up 34 points in the third quarter the way we gave them up ... Oklahoma City didn't do anything tricky. All they did was come at us in transition and play pick-and-roll."

The Thunder were limited to 36 percent shooting in the first half, when they trailed 49-44. The Lakers got off to a strong start, leading 30-18 after one quarter behind nine points by Bryant and eight from Bynum. Oklahoma City outscored the Lakers 26-19 in the second quarter and took off from there.