Oklahoma City Thunder made it a dozen successive NBA wins with a 100-92 victory over the Atlanta Hawks on Wednesday, led by Kevin's Durant's season-high 41 points and 13 rebounds. 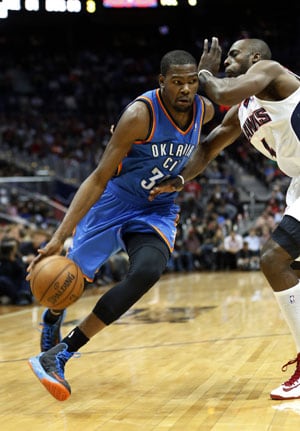 Oklahoma City Thunder made it a dozen successive NBA wins with a 100-92 victory over the Atlanta Hawks on Wednesday, led by Kevin's Durant's season-high 41 points and 13 rebounds.

The Los Angeles Clippers are just behind the Thunder in their own winning streak, notching an 11th straight victory, while New York and Memphis were the other leading teams to win. However Golden State's surprising form surge ended in an unlikely locale, putting in a lax defensive performance and suffering a defeat at the hands of the lowly Sacramento Kings.

Russell Westbrook scored 27 points - 21 in the first half - and had 11 assists for the Thunder, who matched the longest winning streak for the franchise since the then Seattle SuperSonics won 14 straight in 1996.

Oklahoma City (21-4) improved the NBA's best record and atoned for a home loss to the Hawks on Nov. 4.

Jeff Teague scored 19 points to lead Atlanta, which slipped 1-1/2 games behind Miami in the Southeast Division.

The New York Knicks won their first home game against their relocated city rivals, beating the Brooklyn Nets 100-86, opening a six-game gap atop the Atlantic Division as the Nets form falls away.

Carmelo Anthony scored 31 points in his return from an ankle injury while J.R. Smith had 19 points for the Knicks, who had two tight tussles on Brooklyn's home court earlier in the season but dominated this one. Joe Johnson scored 17 points for the Nets.

Zach Randolph had 15 points and 17 rebounds, and Marc Gasol had 12 points and 12 rebounds for Memphis.

The Indiana Pacers matched their biggest victory margin of the season with a 104-84 win over the Utah Jazz. Indiana has reached three figures only four times this season, and has won them all.

Reserve guard Gerald Green scored a season-high 21 points, and Paul George had 20 points, 11 rebounds and four blocks for the Pacers.

Sacramento won its first game in six with a 131-127 victory over Golden State, which slipped 2-1/2 games off the lead in the Pacific Division.

DeMarcus Cousins scored 24 points and Aaron Brooks added 23 for the Kings, who led the game by 15 points before the Warriors tied the scores. A pair of late 3-pointers by Brooks saw the Kings pull away and post the highest score of any team against the Warriors this season.

Golden State's Stephen Curry scored 23 of his 32 points in the second half before fouling out.

The Houston Rockets deepened the gloom for Philadelphia, winning 125-103 to inflict the 76ers fifth straight loss.

Houston's James Harden had 33 points and seven assists, topping 20 points for the seventh straight game. He made 17 of 18 free throws, including six in the fourth quarter, while Toney Douglas hit five 3-pointers and scored all 17 of his points in the fourth for the Rockets.

Nick Young scored 21 points for Philadelphia, which suffered its equal-heaviest loss of the season.

The Los Angeles Clippers stretched their lead in the Pacific and notched their 11th straight win with a 93-77 victory over the New Orleans Hornets.

Blake Griffin scored 18 points while Jamal Crawford added 17 points for the Clippers, who matched the franchise's longest winning streak, previously set in 1974-75 as the Buffalo Braves.

Robin Lopez scored 14 of his 22 points in the first quarter for the Hornets, who were the last team to beat the Clippers but suffered their ninth loss in a row.

Boston's Paul Pierce scored 25 of his season-high 40 points in the second half, hitting 10 of his 11 shots after halftime, as the Celtics beat the Cleveland Cavaliers 103-91.

Phoenix's Shannon Brown scored a season-high 26 points and the Suns hit a season-high 17 3-pointers in a 121-104 victory over Charlotte - the Bobcats' league-worst 13th straight loss.

In Tuesday's other games, the Toronto Raptors won 97-91 at home over the Detroit Pistons and the Orlando Magic had a 90-83 home win over the Washington Wizards.

Comments
Topics mentioned in this article
NBA Los Angeles Clippers Oklahoma City Thunder
Get the latest Cricket news, check out the India cricket schedule, Cricket live score . Like us on Facebook or follow us on Twitter for more sports updates. You can also download the NDTV Cricket app for Android or iOS.