Ty Lawson scored 24 points, including four free throws in the final 17.6 seconds, to help the Denver Nuggets hold on for a 113-107 win on Wednesday over a Minnesota Timberwolves squad that was missing Kevin Love after the All-Star forward went out with a mild concussion in the first quarter. 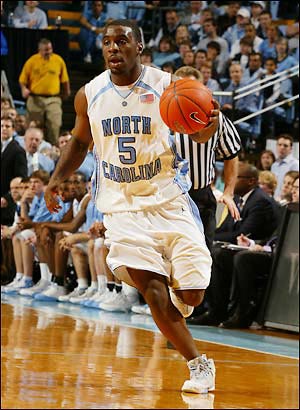 Ty Lawson scored 24 points, including four free throws in the final 17.6 seconds, to help the Denver Nuggets hold on for a 113-107 win on Wednesday over a Minnesota Timberwolves squad that was missing Kevin Love after the All-Star forward went out with a mild concussion in the first quarter.

Arron Afflalo added 21 points for the surging Nuggets, who have won two straight to remain in the thick of the Western Conference playoff race.

Up by as many as 24 points, Denver saw the Timberwolves steadily climb back into the game, even tying it late in the fourth quarter on a 3-pointer by Martell Webster.

All this without their best player on the floor, too.

Love sustained a head injury early in the game after taking an inadvertent elbow to the head from JaVale McGee when the Nuggets center went up for a shot. Love had missed all five of his shots before being knocked out of the game.

He was going to be kept overnight at an area hospital for precautionary reasons.

Anthony Randolph scored 28 points and Derrick Williams had 27 to pick up the slack for the Timberwolves, who have now dropped seven straight. J.J. Barea effectively and efficiently guided the offense, dishing out a career-high 15 assists.

Rookie Kenneth Faried turned in another strong performance as he finished with 16 points and 12 rebounds. This was on the heels of a 27-point, 17-rebound effort against Golden State two nights ago. The high-energy forward was just as difficult to contain for the Timberwolves, especially after Love went down.

Early in the opening quarter, Faried was shaken up when Love gave him a hard shoulder to the chest as he flew down the lane after a rebound. Faried fell to the floor and had to be helped off, only to quickly return.

Top reserve and team leader Al Harrington was noticeably limping up and down the court as he tries to play through a torn meniscus in his right knee. Harrington saw only 22 minutes of action, but still had 11 points.

Harrington traveled nearly 100 miles to Vail, Colo., before the game to have his knee examined by specialists at the renown Steadman Clinic. He made it back in plenty of time for the tip.

Minnesota was trailing by three when Love went crashing to the court. With the UCLA product sidelined, Denver went on a 42-21 run to open up a sizable gap.

That looked to be game, set and match.

Only, the Timberwolves came roaring back.

They tied the game on Webster's 3-pointer with 1:41 left.

But Lawson secured the win at the line by draining four free throws to turn away the banged-up Timberwolves, who were also without Luke Ridnour (ankle).

The Nuggets aren't exactly healthy, either. They were without Wilson Chandler (strained hip) for a sixth straight game and Danilo Gallinari is just starting to regain his touch after breaking his left thumb last month.

Sore thumb and all, Gallinari came up clutch, scoring seven of his 18 points in the final 4:17.

The Nuggets have been pleasantly surprised by the frenzied energy that Faried brings to the floor.

Sure, they expected him to be a solid contributor, but nothing like this. Nuggets coach George Karl said Faried should definitely be in the running for the NBA All-Rookie Team.

"I can't think of five guys in front of him," Karl said.

Comments
Topics mentioned in this article
NBA Arron Afflalo Ty Lawson Minnesota Timberwolves
Get the latest Cricket news, check out the India cricket schedule, Cricket live score . Like us on Facebook or follow us on Twitter for more sports updates. You can also download the NDTV Cricket app for Android or iOS.