Not an All-Star, but Jeremy Lin stars in Orlando

Jeremy Lin was as comfortable in front of a crowd as he is on the court. 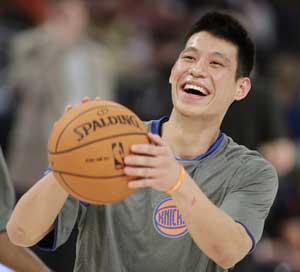 Jeremy Lin was as comfortable in front of a crowd as he is on the court.

Lin shared his story on Friday in front of about 100 people during an entertaining press conference before playing in the Rising Stars Challenge consisting of rookies and second-year players.

Lin isn't an All-Star, but he starred on Friday in Orlando.

"Just to be here and to see the company and all the players that are here," Lin said, "it's just been unbelievable, and I'm just trying to take it all in and embrace it and enjoy it every step of the way."

The NBA determined there would be too many reporters and cameras to have Lin meet with the media on Friday along with the other players in the Rising Stars Challenge. So the league gave him his own availability, territory that only goes to Commissioner David Stern.

Lin's first question was from Knicks teammate Landry Fields, who asked his backcourt mate if he knew who the MVP of the San Francisco Pro-Am was in 2009 and 2010. Lin, from the Bay Area, knew it was Fields.

"He played for the Oakland Believers, and he doesn't have a lot of friends," Lin said.

Fields is Lin's closest friend on the Knicks, and Lin spent the night before his breakout game sleeping on Fields' couch since his brother's place, where he had been staying, was unavailable.

The couch story became well known - Fields even posted a picture of it on Twitter and Lin revealed that a couch was going to be part of the Slam Dunk contest before Knicks rookie Iman Shumpert had to pull out with a knee injury.

"Landry was going to roll a couch out with a cover over it, I was going to be sleeping underneath it, and then we were going to pull the cover," Lin said. "I was going to throw to Iman an alley-oop from the couch, and he was going to jump over both me and the couch, windmill it and then sit down and have Landry hand him a Sprite."

Lin has led the Knicks to a 9-3 record since joining the rotation on Feb. 4. He feared for his NBA career only days earlier, praying that he wouldn't be cut before a Jan. 27 game in Miami.

Even with his stellar play, Lin wasn't supposed to be here, his emergence coming after the Rising Stars rosters were set. He planned to be on a beach somewhere, only to be drafted by Shaquille O'Neal for Team Shaq - who never gave Lin the word himself.

"Shaq missed practice this morning, so I don't know, I think we should fine him or something, because we were all expecting him to be there," Lin said. "But I look forward to meeting him soon."

Lin scored two points in the game, logging only 9 minutes after playing on back-to-back nights. Even his parents got some camera time, both shown looking at their cell phones and ignoring orders to kiss during a "Kiss Cam" segment while Lin looked on in amusement from the bench.

Lin was coming off his first bad game as a starter, held to eight points and three assists on 1-for-11 shooting in a loss at Miami on Thursday. That only created more of the type of doubts Lin has been fighting against all his life.

Part of that, Lin acknowledged, could be his heritage. He's the first American-born NBA player of Chinese or Taiwanese descent.

"I think just being Asian-American, obviously when you look at me, I'm going to have to prove myself more again and again and again, and some people may not believe it," he said. "I know a lot of people say I'm deceptively athletic and deceptively quick, and I'm not sure what's deceptive. But it could be the fact I'm Asian-American, but I think that's fine. It's something that I embrace and it gives me a chip on my shoulder."

Lin's contract for the rest of the season became guaranteed two weeks ago, though he said he hasn't splurged on anything yet. It wasn't long ago he thought he may have to consider playing overseas, or a fifth trip to the NBA Development League. Maybe even a break from basketball.

Now he's the biggest story in the NBA, appearing on the cover of Sports Illustrated two weeks in a row. He wants the success to last, though maybe not the attention.

"I'm definitely surprised that people are still talking about Linsanity or whatever," he said. "I think hopefully as the season progresses, it will go from that to New York Knicks, and hopefully the Knicks can win basketball games, we can make a good push after the All Star break and people will start talking about the Knicks and not necessarily me."

Comments
Topics mentioned in this article
Jeremy Lin NBA
Get the latest Cricket news, check out the India cricket schedule, Cricket live score . Like us on Facebook or follow us on Twitter for more sports updates. You can also download the NDTV Cricket app for Android or iOS.